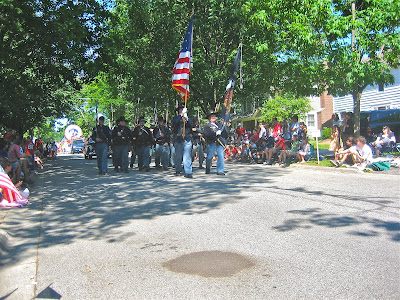 ACW re-enactors traditionally lead off the Lake Bluff parade with Old Glory.
This morning I took Lady Emma Cuddleston-Smythe and her friend Lady Cecily Penshurst to the annual Lake Bluff, IL July 4th parade. It was a very hot day with the morning temperatures in the mid 80-degrees Fahrenheit, but it sure beats getting pelted by rain. The parade typically is lead by a company of Union ACW re-enactors, who stop at every intersection of streets and fire off a volley. Very stirring stuff for both wargamers and non-gamers. 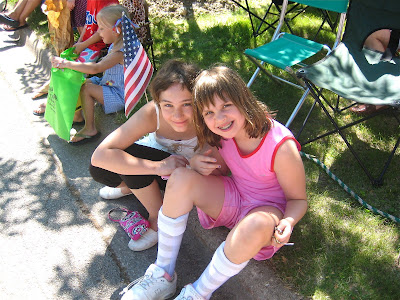 Methinks that the Ladies Emma and Cecily only pretend to enjoy the parade, as they seemed to be more focused on gathering up all of the candy that is thrown from the passing parade floats. There was a company in the parade advertising their fitness club and they were handing out free bottles of water, which proved to be a Godsend since we had not brought any water of our own.
The parade always includes some of the rediculous: 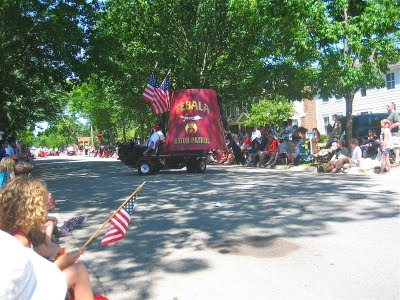 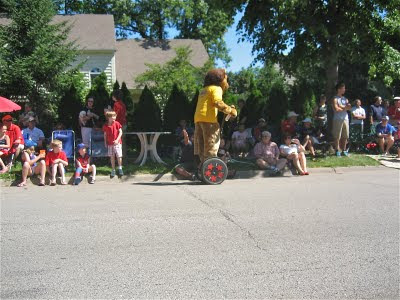 A bear riding a Segway cycle. 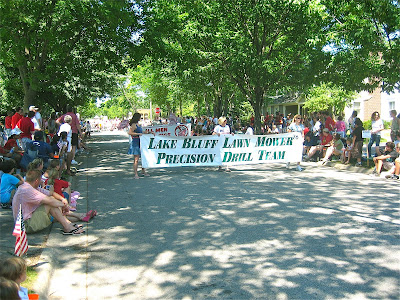 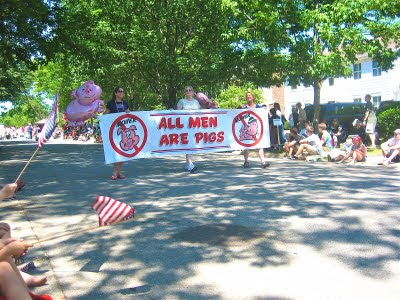 The annual theme of the Lawn Mower team focused on some of our wayward politicians in the US Congress. Ahem. 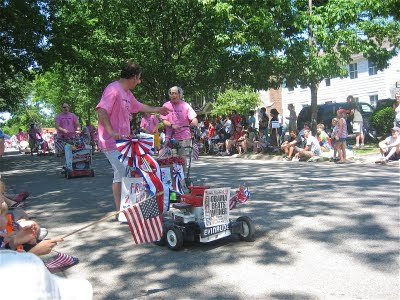 The lads were wearing plastic pig snouts. Note the newspaper headline on the lawn mower.
And it always includes marching bands and Pipe Bands, which I particularly like. It almost makes me want to go home and paint some Black Watch Highlanders. 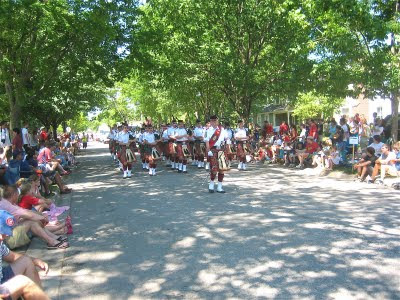 One of two Highland bands that participated in this year's parade.

We had a fun time, but we finally had to bug out after about an hour, as we were baking in the hot sun and wanted to find some cool water for refreshment. Sometimes a small cup or bottle of water is the greatest treasure that one could find.
Afterwords, we headed home and Mrs. Fritz offered to take Ladies Emma and Cecily to the beach for the afternoon, meaning that yours truly will be heading off to the basement to paint figures for awhile. 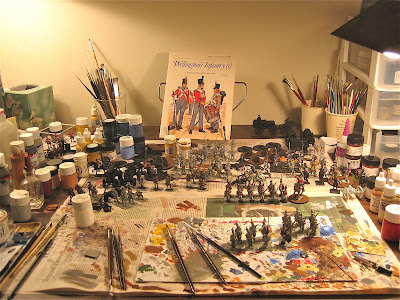 A view of the clutter on my painting table today. It's not very tidy so I will have to do something about that soon, as I'm running out of space. You can see the first company of the 83rd Regiment of Foot in the middle of the table, with the second company in the foreground, waiting their turn to get their uniforms from the quarter master.

I am off to the painting table now. I will post some pictures of the first company of the 83rd Regiment, later this evening. So do come back later.
BTW, we are within a thousand page hits of reaching the 300,000 milestone. Thank you everyone for your continued support of my blog. I only wish that there was some way of figuring out who the 300th thousand person was.
v
Posted by Der Alte Fritz at 1:24 PM