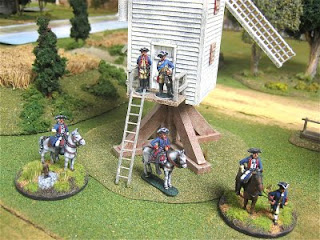 Minden Fritz on his Mollwitz Grey (center) with the Duke of Brunswick (blue sash) and his ADC standing on the windmill platform to get a better look of the goings on. RSM officers flank Fritz on the left (Schwerin) and the right (Winterfeldt). Windmill and terrain pieces by Herb Gundt. Please click to enlarge.


I am rather surprised that I did not drop everything and paint all of the new Minden SYW Austrian and Prussian personalities and staff immediately. However, sometimes life throws other obstacles in the way and so I did not tuck into these little gems until a couple of days ago.

So here are the first three figures in the Prussian set that I have painted. I have not had time to put them on bases and terrain said bases, but the pictures give you a fairly good idea of how they look and how well they match the RSM figures in size and proportion. 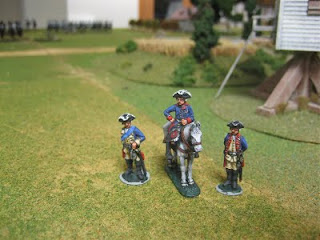 I would imagine that the Prince Ferdinand figure on foot would be a useful figure for those of you who need a king or herzog for you fictional 18th Century countries.
Posted by Der Alte Fritz at 9:02 PM