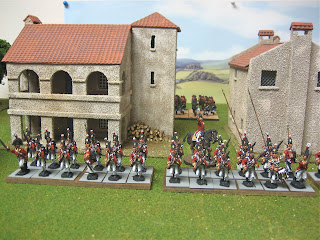 The 83rd (Dublin) Regiment forms up for inspection in a remote town in Spain. Click pix to enlarge. 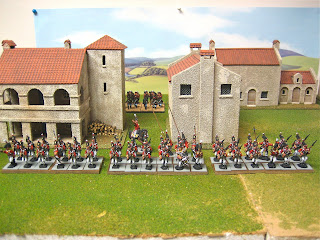 I finished the third company of the 83rd Regiment last evening, along with two standard bearers (who are awaiting their new GMB Designs flags, recently ordered) and thought that I would show them off in front of some of the Herb Gundt buildings that were made circa 1992-94. I haven't decided yet on how to finish the bases, verdant green or dusty/arid style?

I have one more centre company in primer that I will start on today, which would give me four companies of 12-figures, or 48 figures plus two ensigns and a mounted officer. I would have two more centre companies and two flank companies to add after that in order to complete the regiment. Hmm, I just might have most of this done by the end of July at this pace. 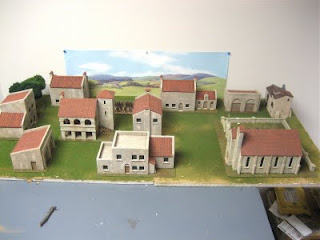 The photo above gives you an idea of what I have in my Spanish Peninsula collection of buildings. These were all made for me by Herb Gundt in , I'm guessing, about 1992-94. They have been in storage since at least 1995 and had not seen the light of day until a couple of days ago. Even though I had sold my Peninsular War Napoleonics back in 2007, I had an inkling that I would regret it if I sold these buildings too. It turns out that I was right.

None of the roofs are lift-off-able, but that is OK for our wargaming purposes. They are also sized more for the older true 25mm figures that were on the market in the late 1980s and early 1990s, before "28mm" became the standard. So they are a little smaller than some of Herb's current works, but again, that is OK with me. It is just that if I have Herb make more buildings, I should probably give him one of these buildings to use in gauging the size of any new buildings, so that they are all compatible. I have in mind adding a cantina and a windmill in the future. 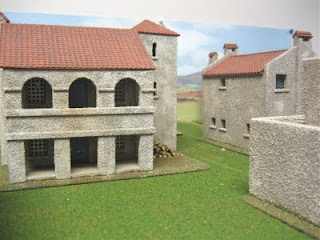 Close up view of one of the narrow streets in the village. 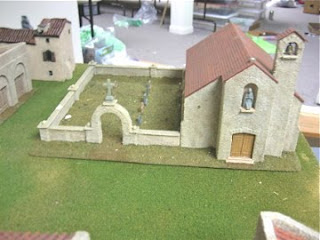 Closer view of the town church. (This picture does not enlarge for some reason).

The current collection also includes a lot of individual wall and gate sections that I can use to make a wide variety of enclosures around the various houses. I can probably make 2 to 4 smaller villages out of this lot, which should suit most of our wargaming needs in the future.