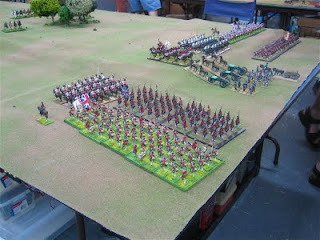 The British center at the start of the game. Click or double click all pix for amazingly larger view of the battle. Infantry include (l-r) 44th Foot (Suren) and the 8th Foot (Stadden) with Front Rank Hanoverian horse protecting their advance.

Last weekend we assembled at Chez Protz in Brown Deer, Wisconsin to have another go with our British and French SYW armies. The British had a rather long losing streak (maybe 4 in a row) in our BAR campaign that they hoped to end. We had players traveling from Minnesota, Illinois and Wisconsin and had a grand old time playing on Bill's expansive wargame tables (6ft by 24ft with two parallel side tables of the same length, but only 2.5 feet wide).
I had the honor of commanding the left flank of His Britannic Majesty's Army in Western Germany, while my colleague Derek commanded the main attack in the center. The father-son team of Todd and Andy, respectively, commanded the cavalry and the right wing.

The premise of the game was that the French army of Lt. General Chevert was on the move hoping to drive the Allies back into their base at Minden. The French had just crossed the Diemel River, near the town of Waldeck, in Westphalia, and they were rather spread out across the length of the table. Prince Ferdinand of Brunswick, commander of the Allied army, saw an opportunity to smite the French as they crossed the Diemel and send them tumbling back to Frankfurt. 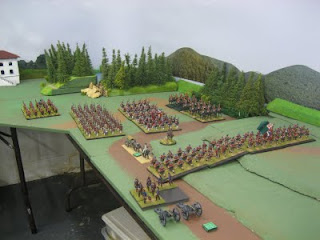 The British left, commanded by Der Alte Fritz in his alter-role as the Erbprinz. Keith's Highlanders (Suren figures) in the forground lead the attack supported by the 11th (Sowles) Foot (Staddens), British Guards (Suren), two troops of Life Guards horse (Staddens) with a half regiment of the 23rd (Huske's) Royal Welsh Fusiliers (Elite Miniatures). British artillery pieces are from Elite and are manned by Suren and Stadden artillery crew. 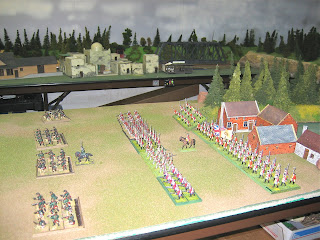 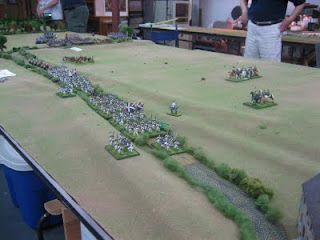 The advance guard of the French advance down the Sunken Road, rather haphazzardly, and place themselves in great danger. 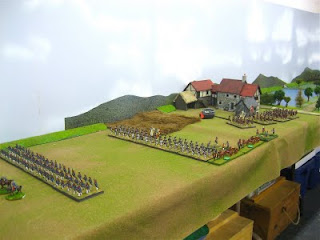 French right wing, lead by Eureka Grassins and supported by Capitulations d'Eu Regt (in white) and the Bulkeley Regt (in red). 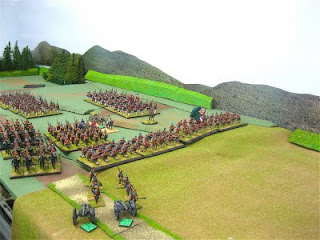 The British left advances towards the Arquebusiers de Grassin. The Life Guards position themselves for a glorious charge up the Sunken Road to put the French Auvergne regiment to the sword. 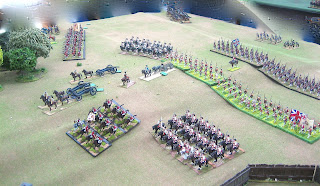 The British center shakes out into a symetrical battle order while the battery of Hessian 12-pounders takes up position on the high ground. Hanoverian cavalry cover the advance of the Hessian artillery. It will drop trail and start firing on the Auvergne Regiment in the Sunken Road. Auvergne is about to get hit from the front and the flank at the same time. 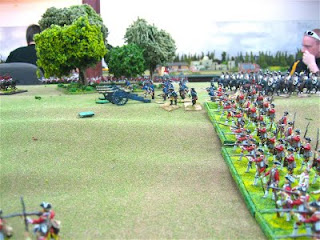 The Hessian artillery prepares to fire, while the 44th Foot move in on the Sunken Road.

That is about half of the pictures that I took of the game. I will post the other half later in the week so that you can see how the battle turned out.

I will give you a hint: the British army finally won a wargame!