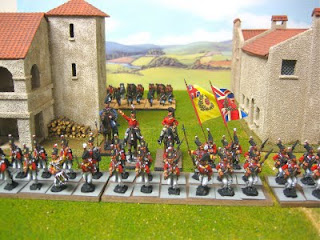 Some lovely GMB Designs standards now grace the 83rd Foot. Lt. Colonel Collins and Major Carr supervise the turnout of the regiment. All figures are from Elite Miniatures. Click once or twice to enlarge the view.
I really got a lot of things done over the weekend: I completed both flank companies of the 83rd Regiment of Foot and now have six companies or 72 figures. I also participated in a SYW battle between the British and the French (somewhere in Western Germany). The grenadier company had been started earlier in the week and I was able to finish them off Friday evening. Then, after a day's gaming in Brown Deer, WI , I returned home and applied the first base coat of "Blood Red" Reaper paint to the light company. Somehow, I managed to find the time to finish the light company by Sunday evening.
You can see the whole regiment (6 companies of 12 = 72 figures + 2 standard bearers and three mounted officers): 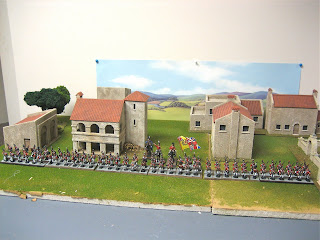 Double click this picture to see all six companies on the parade ground. Buildings and large tree were made by Herb Gundt. Pico railroad back drop. Elite Miniatures figures.

The six companies take up a frontage of 30-inches and I will be adding one more center company (I currently have 4 center companies and 2 flank companies) to make it 5 center companies and 2 flank companies, for a total of 7 companies, or 84 figures. There will also be a 6-figure stand for the colour guard (2 ensigns, 3 drummers, and the RSM). The next company will be the last one in the 83rd Foot, which will be complete, save for a couple mounted officers. This is starting to look awesome!
Battle of Waldeck - SYW
I will post the pictures of the SYW game that we played over the weekend, tentatively called "The Battle of Waldeck", tomorrow night. I am pleased to announce that for the very first time in all of our BAR battles, the British finally won a battle. Huzzah! They also captured the standard of the Saxon Lieb Curassiers to make the victory that much sweeter.
The French army was moving across the Diemel River and the advance guard got a little too far ahead of the rest of the army. Ferdinand of Brunswick saw that the opportunity was ripe for a counter-attack and so he dispatched Lord Granby and his contingent of British infantry and cavalry to hurl the French back into the Diemel.
Minden Miniatures Frederick Arrives
Another bit of good news was that my order of Minden Austrian and Prussian senior officers arrived on Saturday. I will be priming some of the figures tomorrow night so that I can paint them this week. The figures look even better than the pictures that I have seen of these figures and I can't wait to paint them.
Posted by Der Alte Fritz at 11:46 PM