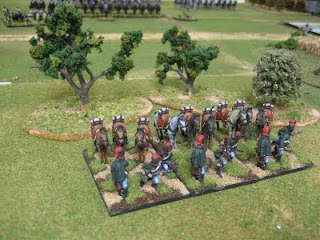 Minden Austrian Dismounted Hussars - Regt. Baranyay. This is one of my favorite hussar uniforms EVER. I like the dark green and the offsetting light blue breeches and the red piping on the dolman and pelise.

Here are a couple of pictures of the Minden Prussian Hussars horseholders and dismounted hussars in busbies. They are, however, painted as hussars in the Austrian regiment Baranyay. There are some minor differences in the Prussian and Austrian hussars, primarily in the horse furniture. The Austrians did not use the shabraque with the "Van Dyking" serrated edging, using instead, an even line of gold or yellow on the border. The other difference lies in the sabretache, which has the Prussian moniker "FR" for Frederick Rex. I just painted over the details on the sabertache. 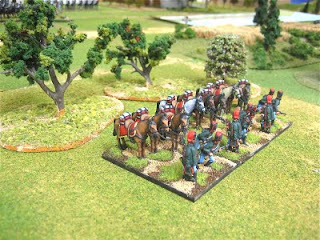 Another view from the side. Look closely at the wire used for the reins leading to the hand of the horseholder.

These fellows will be on their way to the Duchy of Bierstein tomorrow, so I thought that I had better get them photographed and posted on the blog before they were packed away in shipping boxes. My own dismounted hussars (in mirlitons rather than busbies) are far down the list of things to paint, so it will be awhile before they see the light of day.

I used forists wire for the reins leading from the horse to the hand of the horseholder. For this commission, the hussar has to hold three sets of reins, which turns out to be a rather tight fit in the individual hussar's hands, but I managed to make it work. I had to drill a hole through the muzzle of each horse so that I could pass the wire through the hole and run it back to the horseholder. That was a little bit fiddly at first, but I managed to pull off the job in the end. I would recommend using an Exacto knife to make your own dimple in the side of the horse's muzzle and use this as a guide for your drill bit. In this manner, the drill bit won't slip and make a bad hole (thus rendering the horse unusable) and you will be able to drill a clean hole.

I am beginning two weeks of vacation tomorrow and look forward to having some additional time to paint figures. I am currently working on a batch of 16 of the 5/60th Rifles for my Peninsular Project. I like the Elite figures, but after awhile, I yearn to work on the more realistic looking Minden figures. Accordingly, I plan to prime some Minden Austrian Dragoons tonight so that I have some Minden figures to paint.
Posted by Der Alte Fritz at 7:29 PM