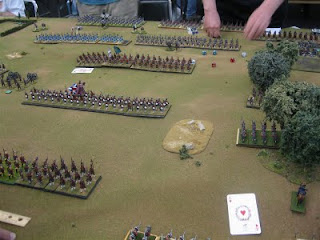 Battle of Fontenoy - previously fought in 2010. (click to enlarge)


What with all of this Bones Apart nonsense of late, you might understandably wonder if Old Fritz was going to have anything to with the Seven Years War for awhile. Well, you would be wrong because I am travelling to Brown Deer tomorrow with my Red Coats to take on Monsieur Chevert's French across the table top. We have several of our colleagues from Minneapolis driving the 400+ miles to the Milwaukee area to game with us, so we want to make sure that we put on a spectacle that is worthy of the journey.

This will be a smaller game than we normally play, with about 8 battalions and 8 to 10 squadrons of cavalry. The original plan was for me to bring my Prussian army, but then it occured to me that my smaller British army would fit the requirements of the game quite nicely. I don't get to game with my SYW British army that often, so this is kind of a treat for me.

I will post pictures over the weekend. The British have not won a battle yet, so perhaps our luck will take a turn for the better. It might also spur me to paint up some more SYW British in the future. A good shellacking of your army provides plenty of incentive to make it stronger the next time.


My flags for the 83rd Regiment arrived from GMB Designs today and I am really looking forward to gluing them onto the flag staffs and taking some pictures. The flags are really very sharp, and they look nifty too.

Mrs. Fritz is going out this evening so I get to stay home and do some painting, after I pack my SYW gear into the car. The grenadier company is about half way done and hopefully I can complete it over the weekend. It will be hard to put in much painting time given that I'm spending the whole day Saturday having fun while Mrs. Fritz... Hmm, maybe I had better nix the painting, or at least not do very much.

Per some comments left by Rob and others, I've decided that the 5/60th Rifles will be used for my two companies of rifles in my Peninsula establishment. That sounds like a good idea to me. Also, I am searching for a new colonel's name as the Colonel Fitch that I mention had the misfortune of dying in Jamaica in the mid 1790s. More likely, a Lt. Colonel would have been commanding anyway.

There was also a discussion on TMP today about the use of the British light companies during a battle. The upshot is that they were not generally positioned on the firing line with the rest of the battalion once the shooting began. So this has me thinking that I can have 5 centre companies and 1 grenadier company on the firing line (divided into grand divisions of two companies each), resulting in 3 grand divisions (and a shorter linear frontage, sans the light company). So my battle line will have 6 companies or 72 figures with a frontage of 36 figures or about 24 inches of frontage in line formation, if I have done my math correctly. That seems to be more manageable in terms of the amount of space that it takes up.

Check back in on Sunday for some pictures of the weekend's activities.
m
Posted by Der Alte Fritz at 5:25 PM