Some New Purchases From Eureka USA 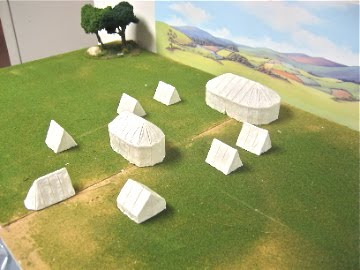 Last Tuesday I placed an order with Eureka USA for a set of 18th Century tents, modelled in resin by Herb Gundt and based on actual dimensions of the tents used in Prussian camps. The tents are not listed on the Eureka web page, but if you ask Rob (in the USA) or Nic (at the Mother Ship in Australia), they will take care of your order.

I also purchased two sets of the Golconda Rising miniatures for Hindu troops in India. I've seen these on the Great White Zulu's "Golconda Rising" blog and had to see them for myself. 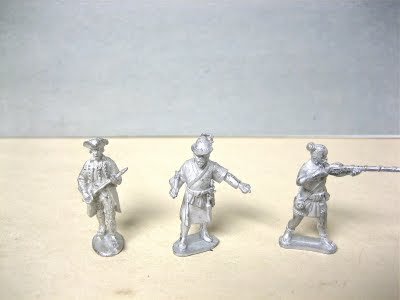 A Minden Miniatures Prussian officer (on the left) compared to two Golconda figures (centre and right). As you can see, both ranges have a comparable height, heft and body proportions.

I have provided some sample pictures of this fine range of figures and placed a Minden figure in each picture for comparative purposes. As you can see, both ranges are compatitable in size and body proportions. This is a big plus in favor of the Golconda figures, as far as I'm concerned. I strongly favor realistic looking figures and these beauties definitely fill the bill.

I can definitely see building some large armies for the SYW in India, knowing that I can augment the Golconda figures with selected French and British infantry from the RSM and Minden figure ranges.

Now I only need to find a painting guide of some sort so that I can paint the samples and post the pictures on this blog. By the way, Eureka USA sells the 8 figures as a set for now, so you get one of each with each purchase. This is not particularly handy if you intend to build up armies and need, say, 60 Hindus firing. You will want to purchase similar figures in bulk quantities rather than in sets. Rob indicated that this is a temporary arrangement until they can set things up administratively. So I would imagine that going forward, the figures will be available in some other manner that is more conducive to army building.

I am very impressed with these figures and will have to start collecting information so that I can determine how many figures will be needed to create an army, how to paint them, and how to organize them. My initial thought is a BAR India variant sometime in the future (we are probably looking at a 2012-13 timeframe here, as my 2011 schedule is full of AWI and SYW figures). 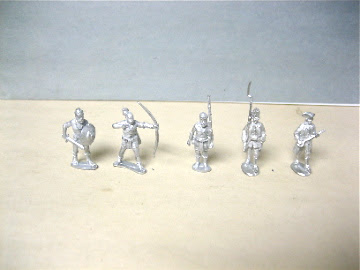