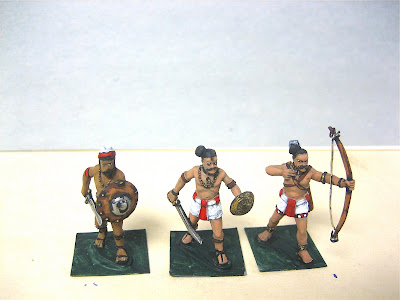 Blue Willow left a comment asking what paint colors I used for the flesh on these Hindu warriors. So rather than burying the response in the comments, I will tell you which paints I used:
Reaper Master Series (in an eye dropper bottle) tanned flesh triad, although I only used two of the colors:

I found that these two colors were sufficient to give me the look that I desired. I did not use #09045 Tanned Highlights. All figures were painted over a coating of Armoury Grey Primer.
I should add that the fellow on the left was covered in Reaper Pro Paints "Shield Brown". I don't have the stock number at hand, but I understand that this series is going out of production and that all future paint selections will be in the smaller eye dropper bottle. I used Shiild Brown as my first sample and wasn't entirely pleased with the result, so I tried the Tanned Flesh triad, which I liked much more.
The archer has been moderately modified with the addition of a piece of wire to simulate the bow string. This little addition makes a world of difference in the final result, so I strongly recommend adding wire bow strings to these figures.

I am starting to give some thought about building armies for the SYW in India, using the Golconda Rising figures as the cornerstone figures for the project. Nic at Eureka Miniatures informs me that the Mysorean (on the French side) and the Bengali (on the British side) sepoys will be ready soon, so that has me thinking about the size and composition of the armies that I would field on the tabletop.

Given that I know very little about this period, I will probably use the army lists in Tod Kershner's "Age of Reason" rules, but I will double the size of the AOR units (from 16 to 32 figure for native units and from 12 to 24 or 30 figures in European infantry units). Kershner basically recommends using an infantry force with 60% native levies armed with bows, swords or matchlocks; 20% trained native sepoys and 20% European (French or British) infantry. I plan to use Minden and RSM95 figures for my British and French battalions.

At the moment, I have no idea of which figures to use for the native cavalry. I will probably just sit back and wait to see what Golconda does with cavalry. I might be able to use some of the RSM Ottoman cavalry for India.

Foundry has some nice nellies (elephants) to use for army command stands, although at $45.00 a copy, they don't come cheap. Perhaps Old Glory or some other company produces an elephant at a more affordable price. Any suggestions?

Uxbridge: "Good God Sir, I believe that you have initiated an official project"