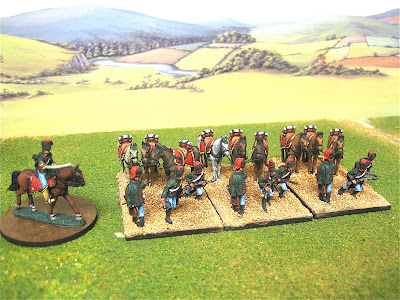 Minden Prussian hussars in busbies painted as the Austrian Baranyai Hussars. Click the picture to activate the Enlargemetron.

I have been working on a set of Austrian hussar horseholders for one of my clients and was able to apply the first step of the basing - spackle compound dipped into fine ballast. I will let the stands dry overnight and then apply a coating of brown ink for the second step. After the ink dries, a little dry brushing with a sand or tan color, followed by the application of static grass.

The figures are actually Minden Prussian Hussars in Busbies, but since the Austrian versions are not available at this time, the client decided to use the Prussians, but painted as Austrians. There is not a whole lot of difference between the two, other than the valise on the back of the saddle, which the Austrians did not have, and the royal cypher of King Frederick, which appears on the sabretache.

I drilled out holes in the muzzle of the horses so that I could fit a piece of florists wire through to represent the horse's reins. Then the wires led back to the horse holder's hands, which were also drilled out. I think that two horses per holder works a little bit better, because it is hard to fit the wire from three different horses into the hole drilled into the horse holder's hands. 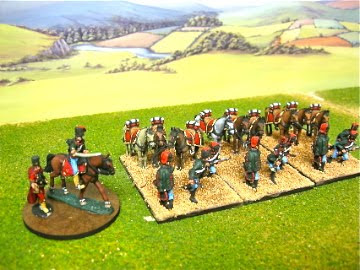 The round base will eventually become the Croat infantry command stand. I may draft the mounted hussar officer into my new unit of Austrian hussars and paint a new officer mounted on an RSM standing horse, rather than using the walking Minden horse. (For some reason this picture doesn't enlarge when you click it)

I really like the color combinations for this uniform. The sky blue breeches provide a nice contrast to the dark green dolman and pelise, with red trim. In fact I liked the finished product so much that I just ordered two squadrons (24 figures) from Minden so that I can add the Baranyai Hussars to my own Minden Austrian army.

The second picture above shows one of the round command stands that I use in my rules. All command stands are on round bases to distinguish them from cavalry stands, which are squares. As noted in the caption, I may paint another Austrian hussar commander, but this time I will put him on an RSM standing horse instead of the Minden walking horse. The standing pose might look better with the Croat foot officer that will also appear on the base. I will have to place a bead of green putty underneath the hussar officer so that he fits better on the RSM horse, but other than that, the change requires little conversion work.
Posted by Der Alte Fritz at 10:58 PM