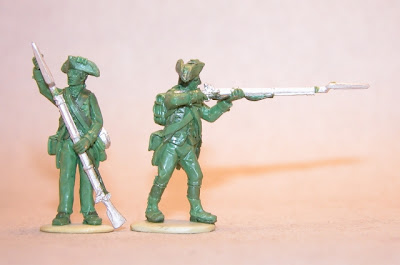 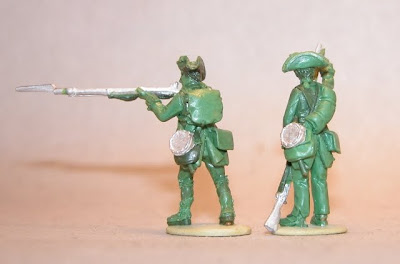 It is time to show everyone a few more of the sculpts that Richard Ansell has made for the Fife & Drum range of AWI figures. The first two poses, shown above - front and rear views - are ramming a musket and standing firing. I happen to like figures that are firing their muskets because, afterall, that is what they do in battle. You could pair these up for use as individual skirmish figures or place them in the firing line of a Continental regiment. You could also fill in a few of the American Militia figures into your Continental regiment for some variety.

Next we have a pair of figures that would also look nice in the firing line. One is cocking his musket firelock and the other is standing at a ready position (he kind of looks like the Hartford Continental logo for the insurance company). I can envision these two fellows making up their own regiment, all at the ready and waiting for the British to advance within firing range. 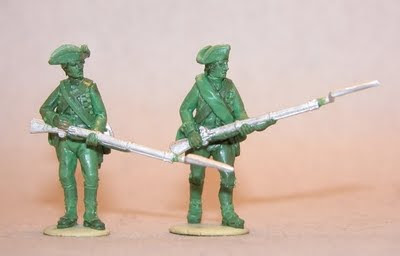 Continental soldiers "at the ready". 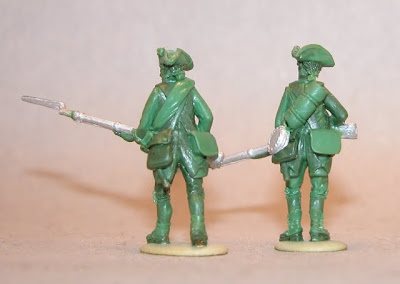 Rear view of the "at the ready" figures. Note the variety of packs: blanket roll on the left and tumpline on the right. Nice!

I will post the four command figures for the Continentals tomorrow evening (officer, drummer, standard bearer and NCO). So come on back tomorrow and see the rest of the new figures. I think that these are real little beauties.