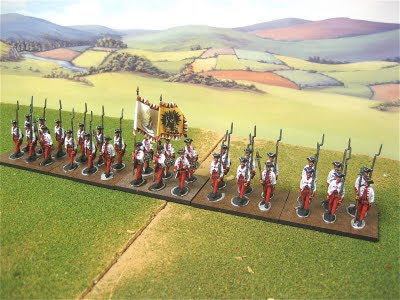 I have been adding more units to my Austrian Army for my Minden Miniatures Project so as to bring both sides (Austrians and Prussians) into balance. When I started this project, I painted nothing but Prussians because, well, I like the Prussians better. I also find that painting things white can get a bit boring. Hence, I am not a great fan of painting Austrians. On the other hand, you cannot have a SYW game with out some opposition.


My Austrian infantry is basically organized along facing color lines. I currently have three infantry regiments, each with two battalions of 30 figures, and each of a different facing color. For example, there is the MacGuire Regt. with red lapels, the Botta Regt. with dark blue lapels, and the Hungarian Josef Esterhazy Regt which, being Hungarian, looks completely different than anything else. Eventually, I will add a green regiment (probably Wied) and a rose/pink regiment (de Ligne) to the army. That would be five regiments with a total of ten battalions of line infantry.

I would imagine that each brigade would have a couple of 3-pound battalion guns and a battery of field artillery consisting of one 6-pound and one 12-pound cannon. 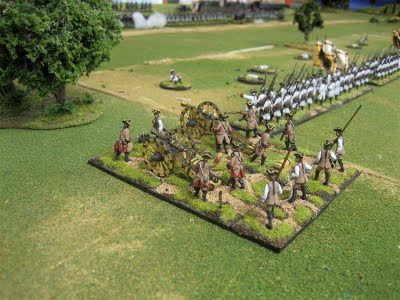 Austrian battery attached to a brigade of infantry. The cannon are from Berlin Zinfiguren, the gun crew are Minden Austrians, and the helpers in waistcoats at the rear are the generic Pioneers that Minden makes. You can paint the Pioneers as either Prussians (straw color) or Austrians (grey brown) .

I don't have much in the way of cavalry for my Austrians. I envision a cavalry brigade consisting of two cuirassier regiments (32 figures) and one dragoon regiment (32 figures). I might also add a regiment of hussars, but these were not employed on the main battlefield by the Austrians, so I either won't have hussars or will attach them to the Croat contingent.

There was a nice piece of timely news announced by Frank Hammond on his Minden Miniatures blog, i.e. the addition of six new Austrian generals and staff officers to the range. Click on the link below to see these wonderful works of art:

http://mindenminis.blogspot.com/2011/06/austrian-high-command-greens.html
Here are a couple pictures of Prince Charles of Lorraine and some of the Austrian staff officers on foot. The vignette possibilities will be endless with these fine figures. Do click on the link above to see the rest of the new greens that Frank announced today. 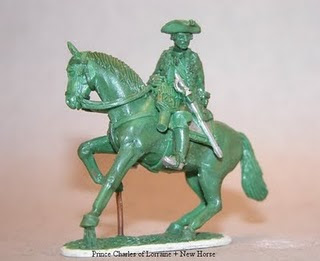 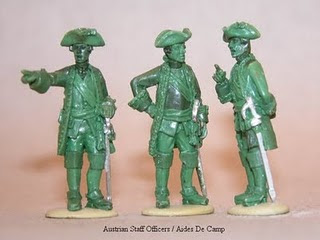 I don't have any senior Austrian command stands as of yet, primarily because I knew that these new Minden beauties were in the pipeline. The wait is well worth it.