BAR Napoleon (in Spain no less) 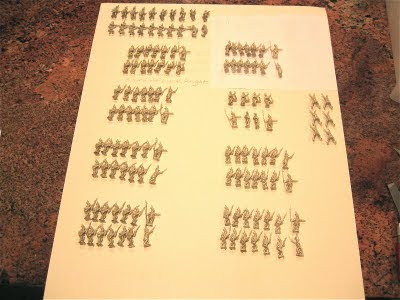 A British regiment (Elite Miniatures figures) organized into 5 centre companies, 1 colour guard, and 2 flank companies: 106 figures. Also shown at top left, 20 95th Rifles = 1 company.
The other day I was talking with Major General Pettygree (Bill P.) and complimenting him on the fine job that he has done with his British 19th Century Colonial Campaign, and to my surprise, the Major General indicated that he had an interest in fighting the Peninsula War in Spain. He further declared that he had managed to fend off the butterflies of a new project.
But damn his eyes if he didn't stir up the kernel of an idea in my own mind with regards to the Napoleonic war in Spain.
It occurred to me that we already had enough French to fight in Spain on the small grand skirmish level employed in Bill's Colonial Campaign. Between us, we have about 9 battalions of 72 figures and plenty of light cavalry for the French.
I have a bunch of Spanish buildings that Herb Gundt made for me back in 1994 that we could use for the project. Oh drat, I've said that nasty word: "project". Thus the terrain is already on hand.
The only thing that we really need are a some British and perhaps some Portuguese or Spanish allies and then we would be good to go. I recalled that I still had a stash of British infantry from Elite Miniatures that had never seen a drop of paint. So I hauled them out of storage this evening to see what I had. 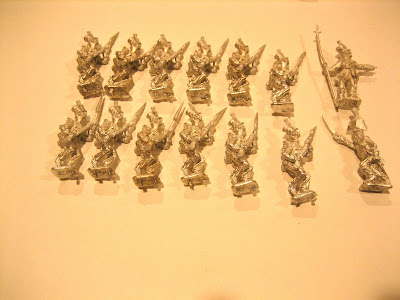 Close up view of one British centre company consisting of 12 rank and file, one captain and one NCO.
As it turned out, I had enough figures to build one decent sized regiment of 106 figures, or 1,060 men at the 1:10 ratio that we use for our BAR war games. I also had a large company of 20 British riflemen plus two 6-pound Royal Horse Artillery cannon with limbers. I also have 30 Highlanders, but I'm not sure that I will use them for this project.
So as I said, Bill and I got to talking about how we could do a Pettygree-like campaign in Spain, set in 1806 - 1807, sort of, and keep things on the small side. I know, the British and French weren't fighting in Spain in 1807, but in our little world they are. So there!
I can envision the following forces for the British and allies team:
1 x British Regiment (106 figures)
4 x Rifle companies (48 figures)
2 x RHA 6-pound guns
2 x squadrons of British light cavalry (light dragoons or hussars)
I might later add another British regiment of around 48 to 60 figures, using some of the old Connoisseur Miniatures by Peter Gilder. Even though these are old figures, I like them and they still look nice when painted and collected en masse. I particularly like the marching pose/stovepipe shako/gaitors pose and this could represent a regiment that had been on campaign a bit longer than the large 106 figure regiment.
So you can see that I have quite a bit of painting ahead of me. This is going to take awhile to get a small British force on the table, but it will surely look splendid. Imagine, 106 figures and a pair of GMB Designs flags. It doesn't get any better than that.
Then we would have to start collecting various civilians, Spanish guerillas, and dismounted British officers -- the latter to use in set designs showing the officers and personalities in the officer's mess or in the camp ground, etc, so that we can advance the story line. Undoubtedly a similar search for figures will need to be done for the French team. Perry Miniatures produces a broad range of French marshals, generals and ADCs for Waterloo and I think that many of these would be suitable for some "on stage" presence done in Bill's Pettygree blog.
The whole point is to do the Peninsula War as a small game and not go overboard in the building of armies for the conflict.
I can envision having a personality figure representing one of the Exploring Officers in the Corps of Guides going on a mission behind the lines to meet up with a guerrilla leader to gain some vital intelligence. I suppose that company of Rifles would accompany him (where have we seen this before?). Other scenarios might involve a foraging expedition, or rescuing some VIP or escorting a convoy through the lines. The possibilities are endless. We could really develop an interesting story line and follow the career of this generation of Pettygrees and see what happens. It could be a lot of fun.
Game on!
Posted by Der Alte Fritz at 9:50 PM