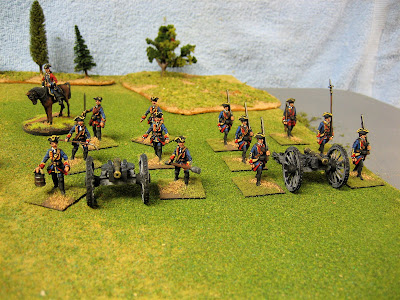 
March concluded with a roar of painting output as I finished the month with 117 Olley Painting Points (97 infantry & guns at 1 point each and 10 mounted figures which count for 2 points each). This follows on totals of 100 points in January and 115 points in February.

Monday night I finished off six Suren British artillery figures and another Elite 6-pounder in order to complete the two gun battery. I rather like the Suren artillery crew and in fact prefer them over the more formal looking Stadden crew. I used an RSM rammer and officer's sword and made the trail spike from a spare piece of wire that I had in my bits box. I should have also made a linstock out of wire with florists wire wrapped around the stick, but I forgot to do this. 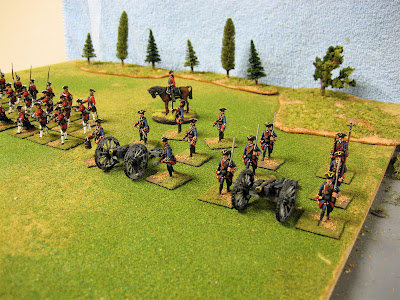 The full battery supports the 1st Regiment of Guards.

The battery complements the Suren Guards rather nicely, as you can see in the picture above. I also finished 9 more Guards over the past couple of days and now have 25 figures painted - almost enough for two grand divisions (30 figures). I have to add some wire cravats to the flag poles before I can prime the figures, otherwise I would have had the standard bearers done too. I am using the GMB Designs flags for this unit. 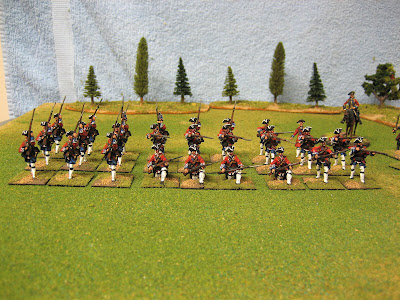 A closer view of the augmented Guards battalion, now up to 25 figures. Suren figures painted by Der Alte Fritz.

A part of me would like to keep plugging away on the Suren Guards so that I could finish the unit in April, but we have a Jacobite Rebellion game coming up on May 9th and I need to add two more clans, 30 figures each, before then, so it is on to the Highlanders next. I may dodge in a few Surens here and there to take a break from all of that plaid paint.