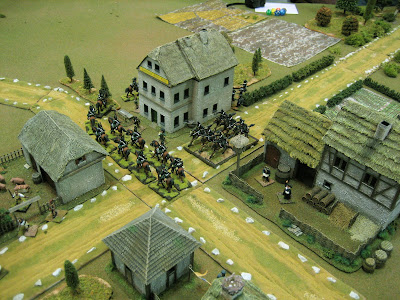 I am posting a number of pictures that I took at this year's Seven Years War Association Convention in South Bend, Indiana that took place on March 20 and 21, 2009. Rather than go into details, I think that it is easier to let the pictures tell the story. So please read the captions and be sure to click on the pictures to see them at full size. A tip of the tricorn should go to convention organizer, Randy Frye, who was in charge of this year's convention. This is Randy's first go as convention director and he did an outstanding job or organizing the events and handling all of the behind-the-scenes logistics that we all take for granted. Randy reports that we had over 100 attendees at the convention, a significant increase from the 70 or so that attended last year's event. Well done Randy!

The annual Pour Le Merite Trophy for the best game was a tie with Dean West's "Korbitz" 15mm game, and Mike Lowrey's "Siege Game" coping the honours. Going forward, the trophy will be renamed the "Mitchell Cup" in honor of our late editor, Jim Mitchell.

In other convention news, Der Alte Fritz and General Chevert volunteered to attempt to publish a single issue SYW Association Newsletter. We think that we might be able to handle the rigors of this job if it is only published once a year. A newsletter of some kind would be beneficial in keeping the bonds of the association fellowship in tack. More on this as we proceed. 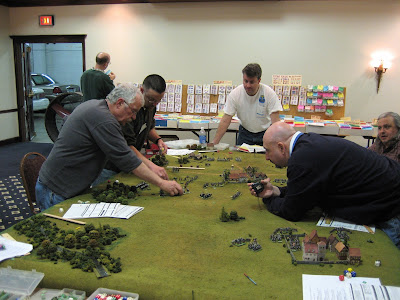 Dean West (on the left) moves some lead on his "Best of Show" recreation of the Battle of Korbitz, in 15mm. 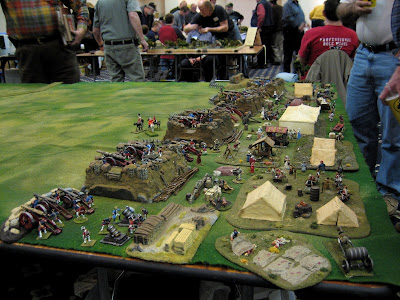 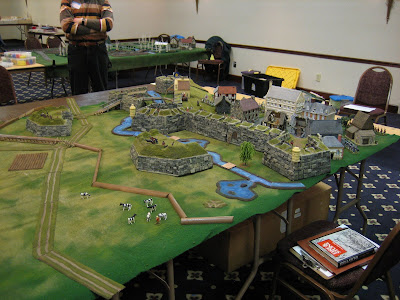 Same siege game, but this time a view of the defenses of the town. This fine game won the best of show several years ago, but returned with an even larger town and defenses. It was quite an impressive game. 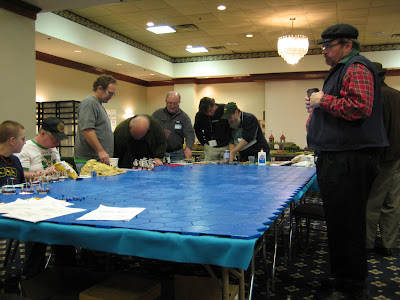 An Age of Reason naval game hosted by Todd Fisher (right). No terrain involved, but impressive to watch (and easy to play) none the less. 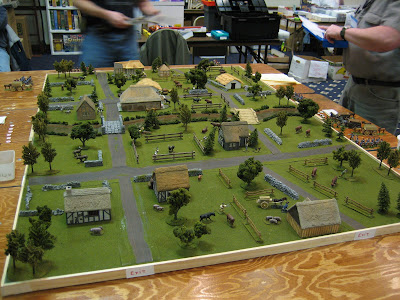 This game was called, "A Cow Too Far". I don't know what it was all about as it ran at the same time as my game. However, I was impressed with the terrain for this skirmish game. 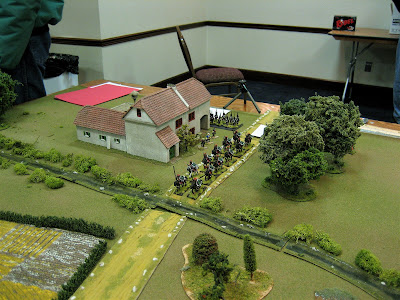 Another view of my SYW skirmish game. Buildings and trees by Herb Gundt. Foundry figures. Roads by Der Alte Fritz. I think that my game won the Susan Lucci Award. 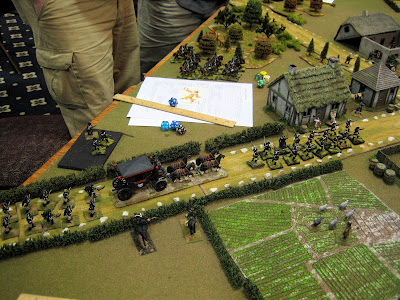 Milady de Winter (in the black coach) and her Black Legion enter the town in search of the Duchess of Sachsen-Vindow. Note the winsome women outside the house offering their wares to the passing soldiers (disgracefully, all but three of the Black Legion piled into the bawdy house for a couple of turns, so they didn't capture the Duchess). 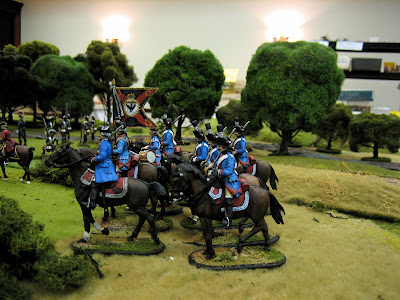 Bayreuth Dragoons in 54mm, from Tradition Studios, thunder across the heath in a skirmish game hosted by Jude Becker. Talk about impressive! I am only glad that I did not see these figures before embarking on my 60-figure cavalry regiments in 30mm size. 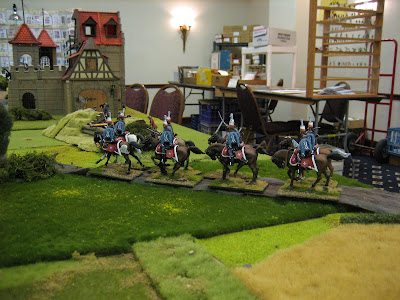 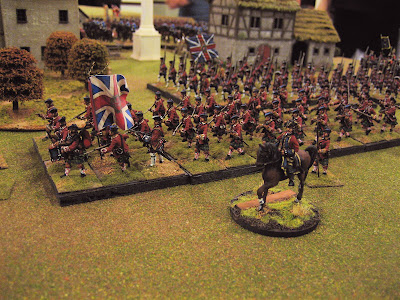 The 87th (Keith's) Highlanders from the collection of Der Alte Fritz. These are Suren figures painted as the Black Watch (42nd Foot). A Suren British general on horse is in the foreground. This is the first time that the regiment has actually fought in the King's service, given that they have been filling in as Jacobites in our Forty Five Campaign. They handled themselves well in a tough rear-guard role. 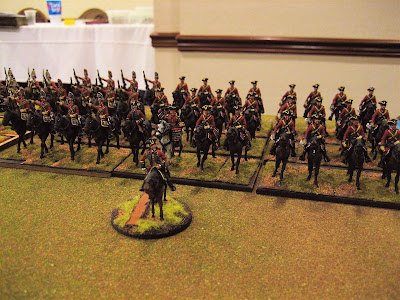 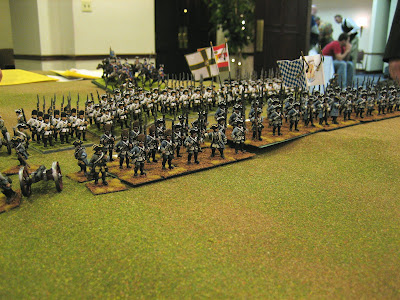 Some unfortnuate Bavarians got charged in the flank by a squadron of Prussian Black Hussars (yes, THOSE Black Hussars which continue to vex the French & Allies) and got wiped out in their very first game. They are beautifully painted Crusader Austrians and I tip my hat to the fellow that brought them to the game. I hope that they have better luck the next time. 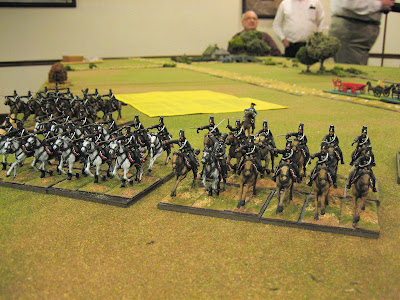 Speaking of the Black Hussars, here they are. They always seem to ride down half of the French army whenever someone else commands them, but when I command them, they seem to always get wiped out. I believe that they rode down three battalions and capture 2 or 3 flags in our BAR game. 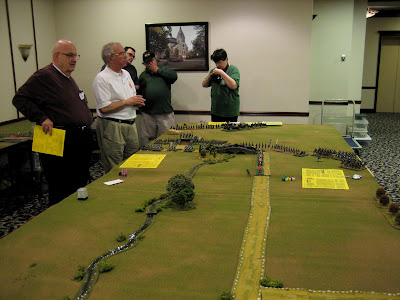 Here is a long shot of the BAR game that Bill and I hosted at the convention. It was based on the Charles Grant "Wagon Train" scenario depicted in the Battlegames Table Top Teaser special issue. The British were attempting to get the wagon train off the table before the mighty French army could close in. We just barely made, with all but one of our infantry battalions either wiped out or routing at the end of the game. Our cavalry saved the day. 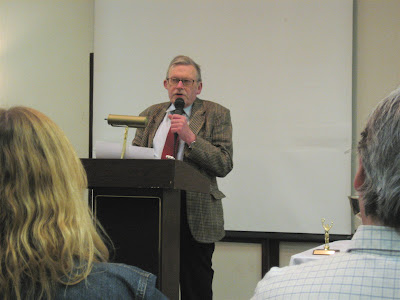 Christopher Duffy presented an informative and entertaining analysis of the evolution of Austrian and Prussian battle tactics at the convention. He is currently working on a revised version of his book about the Jacobite Rebellion of 1745.