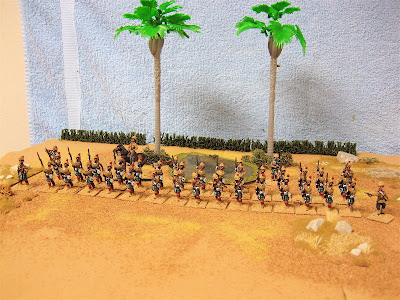 Three 12-figure companies of the Seaforth Highlanders guard the El-Teb Oasis, somewhere in the Sudan. Or is it in the Northwest Frontier? Click the pix to enlarge.

I have been making fairly good progress on the painting of the Connoisseur figures that will comprise my regiment of Seaforth Highlanders. Over the past week, I have added two more companies, or 24 figures, to the regiment as it trains and prepares for its first posting in far away Tranjipour. Since the Seaforths fought in both the Sudan and Afghanistan, I can use them in General Pettygree's Tranjipour campaign in latter area or have them fight the Dervish in the former area.

As you can see in the two pictures, I am starting to achieve some critical "mass" to my collection of Highlanders. I find that when I get to about 36 figures, that the unit has the amount of mass that is appealing to the eye. Once one of my units reaches mass, then the level of excitement increases and I find that I get even more inspired and motivated to finish the regiment. Painting large regiments is a matter of building painting momentum. I seem to have hit my stride now.

It seems like I am able to clip off about a company of figures every 2 or 3 days, so it shouldn't be too long before the Seaforths are up to their full strength of six companies or 72 figures. The key to my painting speed seems to be (1) a growing familiarity with the figures, and (2) having settled on a combination of paint colors (or a formula, if you will) that yield the khaki effect that I was looking for. I also switched from grey primer to black primer and that seems to speed things along just a bit. 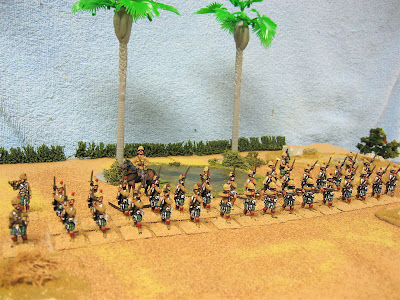 A closer view of Companies A, B and C of the Seaforth Highlanders, Colonel Mackenzie (mounted) commanding.

My Colonial brigade will be quite a bit smaller than my SYW or Napoleonic forces. This is in part due to the fact that I am dove-tailing my brigade with that of General Pettygree (who is graciously providing all of the opposition as well). Once the Seaforths are completed, I have plans to paint two small mountain guns (each with 3 crew), a 12-figure squadron of British hussars and a 12-figure squadron of 21st Lancers. I also have the figures for British regulars in trousers (do I call these an "English regiment"?). Once those figures are painted, then this project is done. I also have a lot of Connoisseur and Perry Dervish that I may ship to Sri Lanka for painting, but that is far into the future.

Upcoming Events
The annual Seven Years War Association Convention is coming up this next weekend March 20 and March 21 at the Holiday Inn Downtown in South Bend, Indiana. I plan to host a small skirmish game on friday to resolve the predicament of the Duchess of Sachesen-Vindow from the Elector vs Empire group. Then on Saturday afternoon, Bill, Randy and I will be hosting a French versus British SYW game using our BAR rules.

On April 18th, I will be playing in another In The Grand Manner game at Keith Leidy's home (he of the three 6ft by 24ft tables) and this looks to be fun, as it will be an encounter game that starts with French and Allied cavalry entering the table from random points. The position of the cavalry forces will determine the entry points of the infantry for each side.

The conclusion of the Jacobite attack on Curmudgeon Castle will finally be resolved on May 2, 2009 at Randy's house in DeKalk. So I plan to paint two 30-figure Jacobite regiments during the month of April so that I can beef up my Jacobite Army.

SYW British
I splashed a little bit of paint on some Stadden British grenadiers last night and decided that it was time to finish my British contingent. The Austrians have been expanded to the point where they can hold their own against my Prussians, so I think that it is time to pay some attention to my redcoats. I have four battalions completed (3rd Foot, 8th Foot, 11th Foot and the Black Watch). I have 18 figures of the 4th Horse and 12 Household Horse Grenadiers. The 4th Horse will eventually have 36 figures (3 squadrons) and I will add a squadron of Life Guards to the Household Cavalry. I also need to paint some 6-pound artillery pieces and gun crews. Eventually, I might add a regiment of Guards (Surens) and another couple of line regiments (Front Rank and Warrior).
Posted by Der Alte Fritz at 5:13 PM