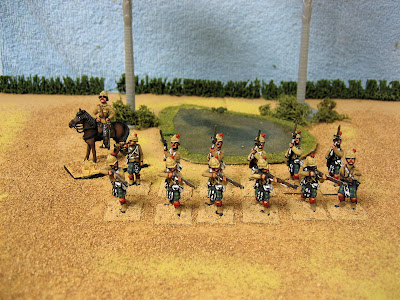 I have decided to take a short break from painting Seven Years War figures in order to avoid the onset off "burn out" that can occur after one has painted the same thing over the course of three months. I've been painting Austrians since December 2008 and need to do something completely different. Accordingly, I have selected 19th Century British Colonials as an interim project for the month of March.

Bill Protz has been building his collection of Sepoys and Tugs for his fictional Tranjipour Campaign, set in 19th Century India on the Northwest Frontier. I had promised Bill that I would raise a regiment of British regulars to supplement his Indian infantry and Bengal cavalry that are currently stationed at Fort Grant. I had a nice pile of Connoisseur Miniatures Highlanders that I was going to paint as the Black Watch for the Sudan and another regiment of "English" infantry in traditional kit. Harking back to Gunga Din and having a general liking for kilts and bagpipes, I decided to paint the Highlanders for Bill's project. 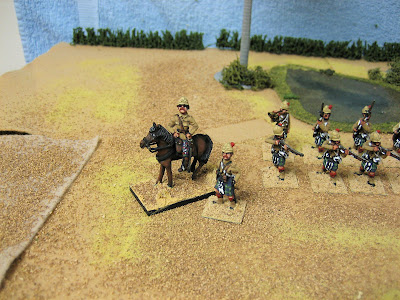 I selected the Seaforth Highlanders (78th Regiment), which was formed in 1881 through the amalgamation of the 72nd and 78th Highland regiments under the Stanley reorganization scheme, which paired two existing single battalion regiments with one another to form a new two-battalion regiment. The official recruiting area for the regiment was the whole country north of Inverness (Sutherland and Ross shires plus the Hebrides) plus the adjacent counties of Nairn and Moray (to the east of Inverness). Since this is the home area for the Mackenzie clan, I decided that the fictional regimental colonel would be a Mackenzie. (My apologies to anyone if I have completely bungled this up - my knowledge is minimal in this respect).

There is another reason for my selection of the Seaforth Highlanders: they were sort of responsible for introducing me to the wargame hobby. Back in 1981, I was visiting London on a business trip and while strolling around the town during some free time, I stumbled into a quaint little toy soldier shop called "Under Two Flags". I hadn't looked at toy soldiers (54mm) in ages, but the window display had a square of Seaforth Highlanders fending off an attack of Dervish. One look is all that it took to hook me. So I entered the store and bought the whole square! I developed a good relationship with the store proprietor, Jock Couts (and I understand that he could be a bit prickly with customers, so perhaps I was simply lucky) and so every time I visited London, I would stop in at his shop and chat for awhile and make another purchase of figures.

Eventually, Mr. Couts stopped producing his own range of figures, but I wanted to increase the size of my army. So he steered me towards a range of 54mm toy soldiers called Steadfast, and I bought another square of soldiers. The problem was though, that I didn't like the khaki color that Steadfast used on its figures in comparison to those of the Under Two Flags range. So back home in the States, I visited a local hobby store called "The Hobby Chest" in Skokie, Illinois in order to purchase some paints. I planned to repaint the Steadfast figures. Well, after painting a couple of figures, I decided that this was a waste of time, so I tabled the project.

On a visit to The Hobby Chest, one day, I say an advertisement flyer for the Little Wars Convention in 1986. I had never heard of wargaming, but it sounded interesting. So I visited the convention that very weekend and WOW, was I ever amazed to see so many people playing games with their toy soldiers. I mean, all that I ever did with my 54mm figures was to line them up on the table and look at them. I'd organize them in squares and create little tableauxs, but it never occured to me that I could actually play with them.

The first game that I saw was Hal Thinglum's recreation of Isandlhwana in 25mm. That was a jaw dropping experience to witness. Thousands (so it seemed) of Zulus were over running the small force of British figures. What an introduction to the hobby. The next game that I noticed was a SYW game hosted by the fellows from RSM Miniatures. The tricorn hats immediately caught my attention and I watched the whole game over the next 2 hours. I was so intrigued by this game and these figures, that I bought 30 British musketeers and 30 British Grenadiers and some paints. That was how I got started in the wargaming hobby.

I painted the first company of 12 figures over the weekend, plus Colonel Mackenzie, and primed up another batch of 18 figures. Eventually, the regiment will have 6 companies of 12 figures, or 72 figures in total. This is going to be a fun project.