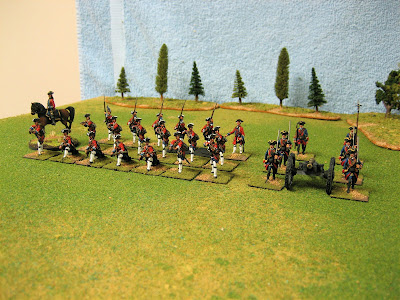 
I have been working on the 1st Regiment of Guards for my British WAS/SYW army over the past week and I finally have enough of them done to justify taking and posting a picture on this blog. As of Sunday evening, I had 17 figures completed and another 9 figures should be completed with one more evening's worth of painting.


The batch of figures shown in the pictures have been a work in progress that probably started in 2006. I painted a couple of the figures and started the rest, then grew tired of the project and set them aside, where they have resided in a cigar box over the past two plus years. I seem to have more enthusiasm for the figures this time around, as I am plowing through them at a fairly fast pace. I have another dozen that were primed this evening and should be hitting the painting table soon. Eventually, the battalion of Guards will have 60 hat men and 12 grenadiers. 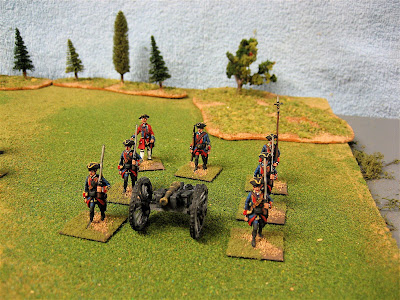 A closer view of the British artillery crew (Staddens) and the 6-pounder from Elite Miniatures. The officer in the red coat is a Suren figure.

Last night I took a short break from the Guards and painted a gun crew of six Stadden figures and one Elite Miniatures 6-pounder. The brigade had no artillery, so I thought that I had better remedy this as soon as possible, what with the French reportedly advancing towards the British foreward base at Minden. Today, I cleaned and primed a dozen Suren British artillery crew, 8 Front Rank artillery crew, and 4 Elite Miniatures crew plus another 6-pounder. I am looking forward to seeing how the Suren artillery crew paint up because they have more active poses, in contrast to the curious marching pose that the Staddens have. The Stadden artillery crew would make for good "pioneer" figures in anyone's imagination army. 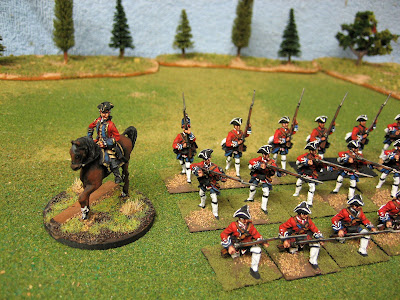 Close up picture of the Suren British mounted general and some of the Foot Guards.


The handsome gentlemen shown in the picture above will likely become my "army general" for the British contingent fighting in Germania this year. I haven't decided on a name for him yet, although I am leaning toward him being Lord Ligonier during the period of the War of the Austrian Succession. Since this is something of an imaginery campaign, I may decide that Ligonier found the Fountain of Youth and was young enough to lead the army during the SYW as well, even though that did not happen. 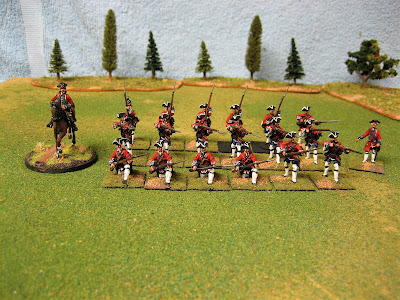 Another view of the Guards. 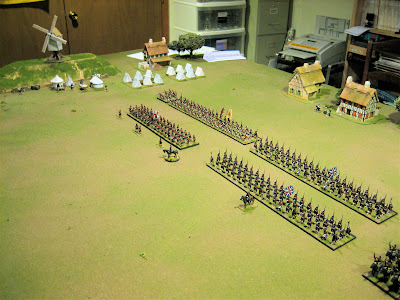 The whole brigade turned out on the Basteau Heath outside of their camp at Minden.

As of this evening, my British army in Western Germany consists of four battalions of infantry: the 3rd (Buffs) Foot, the 8th (Onslow's) Foot, the 11th (Sowle's) Foot and the 42nd (Semphill's) Foot/Black Watch. Note that I am using colonels from the WAS period rather than the SYW. This infantry brigade is supported by one section of artillery and 5 squadrons of cavalry. It is a work in progress that has many months ahead of it, but I have overcome my aversion to painting red coats and seem to be rather fired up to build the brigade as soon as possible.

So far, I have approximately 102 Olley Painting Points done for the month of March, which is a very good pace. Things should slow down a bit in April as I turn my attention to Jacobite Highlanders for our game on May 9, 2009.
Posted by Der Alte Fritz at 11:49 PM