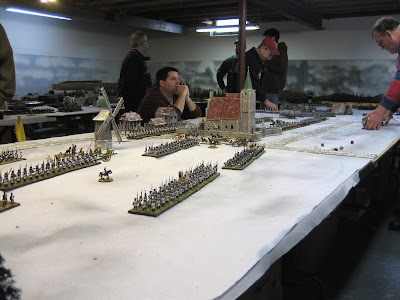 A view of the battlefield from the Austrian right wing towards Leuthen village in the center and to the far Austrian left wing at Sagschutz, in the distance.


On Saturday February 28, 2009 we refought the historical battle of Leuthen (December 5, 1757) at Monsieur Chevert's spacious wargame room in Brown Deer, Wisconsin. The outside temperature was a hearty 20F degrees and a few wisps of snow floated from the skies to put us all in the mood for some winter warfare. The historical battle was fought between the Prussian army of Frederick the Great (39,000 troops: 29,900 infantry and 9,800 cavalry) and the Austrian army commanded by Charles of Lorraine (approximately 55,000 total men, according to Christopher Duffy) and his advisor Leopold Daun.

Of course, we have nowhere near the total of nearly 100,000 combatants for that would require a table the size of a basketball court. Nevertheless, we were able to fill up our 6ft by 24 ft table with 12 Prussian and 15 Austrian battalions and 6 or 7 cavalry regiment (48 to 60 figures per side. The teams were divided into 4 Prussian players and 6 Austrian players. I played the unusual role (for me) of the Austrian commander, Charles of Lorraine, primarily so that I could regulate the arrival and movement of Austrian troops on the right wing. As you may recall, Frederick marched around the Austrian left wing and in naval parlance, he "crossed the T" of the Austrian battle line and rolled it up. 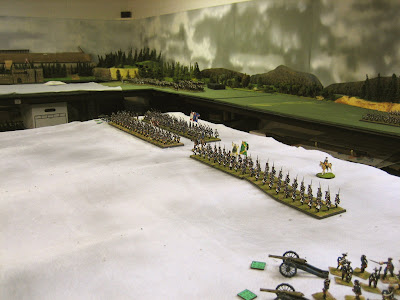 The Prussian advance guard and a battery of heavy Brummer guns form up on the Austrian left flank . (click all pictures to enlarge the view). 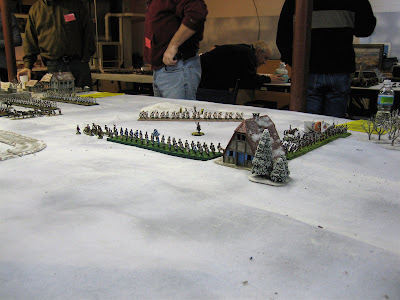 The Bavarians and Wurttemburg troops defend the Austrian left, anchored on the village of Sagschutz. 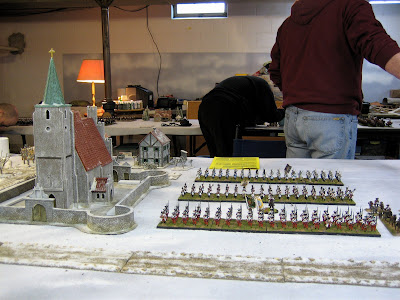 Austrian center occuppies the ground between Sagschutz on the left, and the town of Leuthen, in the middle. The church and all other buildings and roads and trees were modeled by Herb Gundt of H.G. Walls. 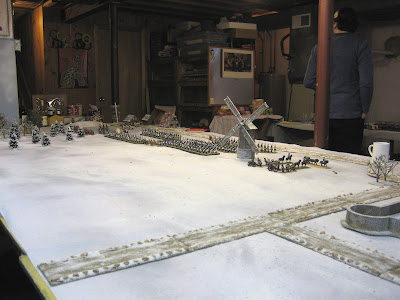 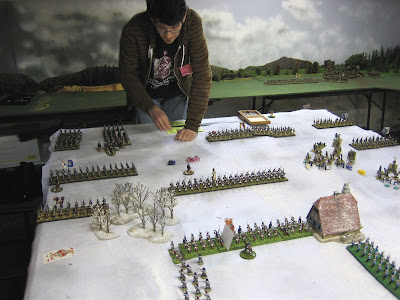 The Prussian advance guard attacks the Wurttemburgers at Sagschutz. Note the Prussian Brummer battery on the right. 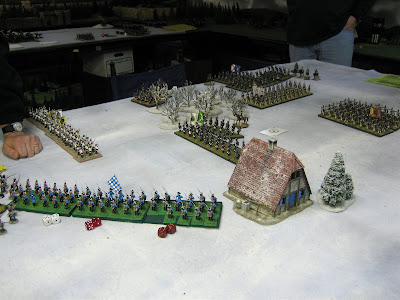 The Wurtemburgers have routed and now the Bavarians advance to fill in the gap in the Austrian line. A battalion of Hinchcliffe Austrians can be seen next to the Hand of God in the picture. 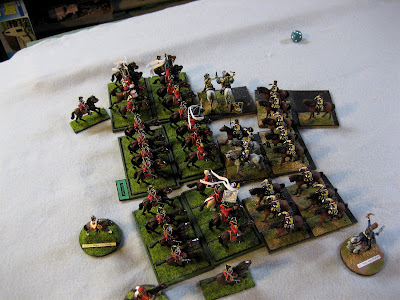 The Prussians deployed three regiments of cuirassiers on their far right flank and these fought a hard battle with the Saxons throughout the day. See the Campaigns in Germania blog for the rest of the cavalry action. 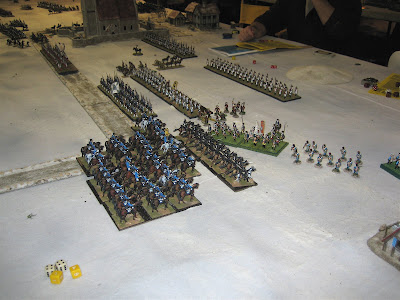 The Jung Krakow Dragoons (DR2) and the Black Hussars (HR5) smash through the center of the Austrian line between Sagschutz and Leuthen, in a style reminiscent of the charge of the Bayreuth Dragoons at Hohenfriedberg in 1745. 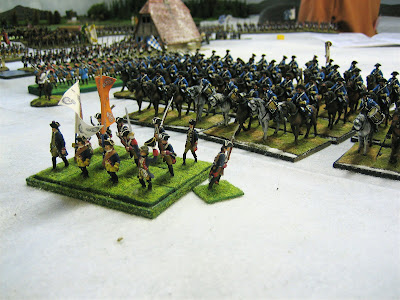 Some Wurttemburger remnants flee in terror from the Jung Krakow Dragoons, who achieved a break through of the Austrian army. The outcome of the battle was in the balance here. 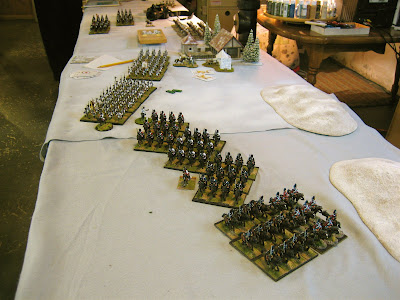 Austrian horse grenadiers and two battalions of infantry from the reserve in the center rush to the point of the Prussian breakthrough. 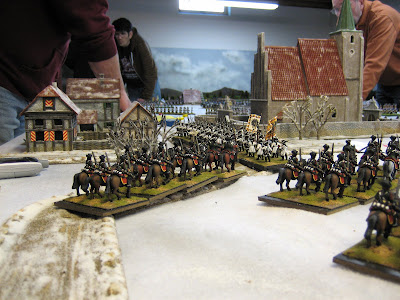 The de Ligne Dragoons (DR31) ride through Leuthen to stop the Prussian attack. 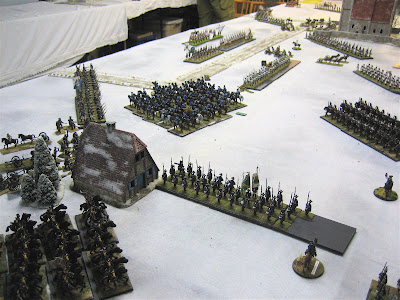 The Jung Krakow Dragoons retire as the fresh Austrian horse grenadiers arrive in the nick of time to plug the gap and save the day. A regiment of Prussian cuirassiers awaits their turn behind the village of Sagschutz, but their path is blocked by the IR25 Kalckstein musketeer battalion to their front. 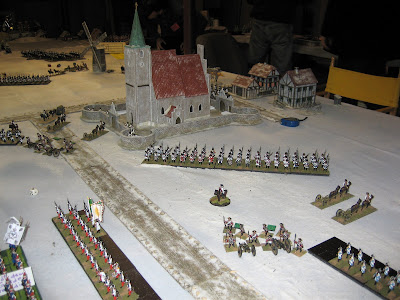 Austrian converged grenadiers have moved up in front of the Leuthen church and form the anchor of a new defensive line, facing the Prussian attack from the west.

At this point in the game, it was around 4PM and we had an hour to go before the game ended. The Prussian players decided that with all of the reinforcements coming up through Leuthen village, that they would not be able to capture the village within the next hour. The capture or control of Leuthen village was their victory condition. So as the evening light faded away, the King uncharacteristically withdrew his army back to its position around Sagschutz. While the Prussians were not defeated, they felt that they could not achieve the victory conditions. Perhaps that was the wise thing to do.

Or was it? By my count, the Prussian had only committed 5 of their 12 battalions to the battle so far, and on their right wing, their powerful cuirassier brigade seemed to be gaining the upper hand in the cavalry fight and they still had the Jung Krakow dragoons and the Prinz von Preussen (CR2) cuirassiers around Sagschutz. The two guard battalions and another grenadier battalion were among the uncommitted infantry units at that time. The Prussians also had a powerful battery of 5 12-pounders lined up near Sagschutz that could blow some holes through the Austrian infantry. Admittedly, the Austrians were bringing up the rest of their infantry and would soon outnumber the Prussians, but playing on the vertical table meant that they would not be able to get all of their numbers into the battle. It seems that there was still a decent chance for the Prussian to reform and organize an assault on Leuthen village.

Whatever the outcome, a good time was had by all and it was an opportunity to try our hand at recreating a famous battle of the Seven Years War. Leuthen is a difficult battle scenario, because you have to keep all of the players, especially the Austrians on the right flank, busy throughout the game. At the same time, the Austrians on the left flank are going to get rolled over by the Prussian flank attack. Leuthen is not a fair and balanced scenario to refight. I imagine that I would make a number of changes were I ever to refight this battle again.

For starters, I would reduce the number of troops on the table in order to improve the fluidity of the battle, i.e. create more maneuvering space. Perhaps a Prussian force of 8 battalions and 4 cavalry regiments would suffice for Frederick. I'd give the Austrians 9 line battalions and one light infantry battalion and the same 4 cavalry regiments that the Prussians have. This increases the importance and weight of each individual infantry and cavalry unit and would seem to open up the game even more. I would also give the Wurttemburgers and Bavarians a lower rating , such as Trained, instead of Veteran and maybe make half of the Prussians Elite. Another idea is to give the Prussians the first fire on the first and or second turn, then rely on the card draw after that.
h
Posted by Der Alte Fritz at 7:24 PM