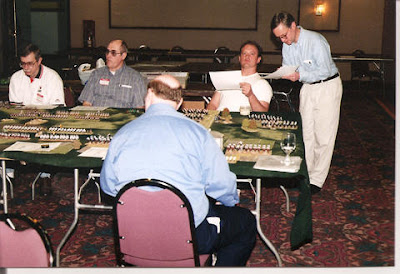 Der Alte Fritz (standing on the right) hosting a participation game at the 1998 SYW Association convention.

I was looking at some of the photos of the recent SYWA convention that were posted on the group's yahoo site and found this picture of me running a game at the convention in 1998. The fellow seated at the far left is the late Greg Nichols, who succumbed to cancer a couple of years ago. Seated next to him is an old friend, Rich Niersbach. I'm not sure who the other gentlemen are.

I haven't changed all that much other than the fact that my locks are a little bit greyer. Given the date of this picture, the game would have been Austrians versus Prussians, all of them RSM figures, and we would be using my own Alter Fritz rules. These rules are printed on a single side of an 8.25" by 11" sheet of paper. Most gamers pick up the gist of the rules and the few nuances by the end of the second turn. They would often run the game on their own and I would simply ajudicate any unusual situations. The figure ratio is 1:30 in these rules, but they would also work at 1:20. I have never tried them at my current favorite 1:10, so who knows?
Posted by Der Alte Fritz at 6:00 PM