I guess that I just can't do anything nice and easy, when it comes to wargaming projects. I like big beautiful battalions with lots of color and even more miniatures. So after building SYW Austrian and Prussian armies at a 1 to 10 ratio and previously using the same ratio for the American Revolution and the American Civil War, it was probably inevitable that my thoughts would turn to doing something similar with Napoleonics. My nascent 1806 Project is the epitome of doing things in the grand manner, what with French battalions sized at 72 to 81 figures and my 1806 Prussians checking in with 60 figures. A sample French line battalion is depicted in the following pictures. Please click on the pictures to enlarge the photograph. 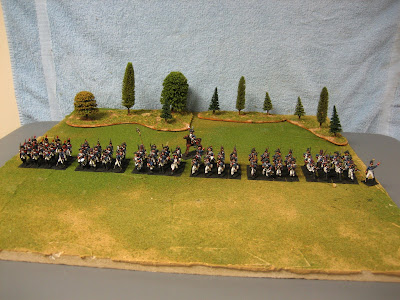 French battalion in line with voltigeurs deployed in the line with the rest of the unit. Figures are Elite Miniatures (painted by Der Alte Fritz). 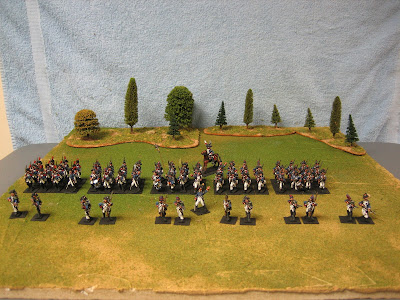 French battalion in line with voltigeur company in skirmish order.


My current thinking is to organize the French into 9 companies, per the organization in effect during the glory years of 1805 to 1807. This breaks down into 7 line companies, 1 grenadier company, and 1 voltigeur company. Each company will have 9 figures based in 3 ranks, so an infantry company stand will be 3 figures wide by 3 figures deep. Each figure will be mounted on a 3/4 inch metal base so that it can adher to a magnetized movement tray. Each regiment will have two battalions and four battalions will comprise a brigade. For the post-1807 period, the French would be organized into the more familiar 6 company organization. 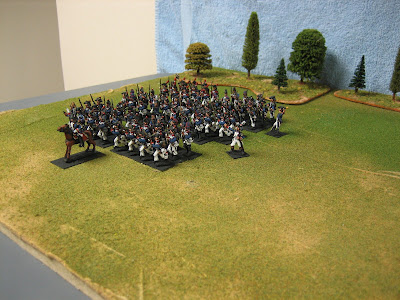 Now that's what I call a column! French battalion deployed in a column of divisions with a frontage of two companies. The grenadiers and voltigeurs are deployed in the rear ranks.


The 1806 campaign might seem like an unusual choice of subsegment of the vast Napoleonic Era, but it has all of the elements that have long attracted me to SYW wargaming.

First Element: The Prussian army of the period still retains many of the trappings of its Frederician organization and appearance. The regiments are organized in a similar manner, the uniforms are little-changed from the SYW period, save for the use of trousers instead of breeches on campaign and the wearing of a bicorn instead of tricorn hat. The regimental flags are nearly identical to those used in the SYW (other than a different royal cypher in each period) and regiments take the name of their inhaber or colonel, rather than a regimental number. The artillery and the cavalry organizations also bear a strong resemblance to their SYW counterparts, with the one major exception being that Prussian cuirassiers no longer wear a cuirass. So all in all, an aficionado of the SYW will feel very much at home commanding a Prussian army, circa 1806.

Second Element: The period 1805 to 1807 represents, in my humble opinion, the glory years of Napoleon and his Grande Armee. This mighty miliatary machine, trained to perfection at the camps at Boulogne on the English Channel, were unmatched in this era. Napoleon used this instrument of war to defeat the combined might of Austria and Russia in 1805, Prussia in 1806, and Russia and Prussia in 1807. For some reason, this army seems to get overlooked by wargamers, who seem more interested in Napoleon's later years (1812 to 1815) when the armies were larger, but not as agile or superior to its opponents.

Third Element: Did I mention that the French wore long-tailed coats and bicorn hats? This uniform, like its Prussian counterpart, represents a transition from the uniforms of the elegant 18th Century, to that of the harder and grittier 19th Century. Also, I don't care for shakos. They look fine on the British, but I've always thought that the French look better in the old, pre-Bardin reform, uniforms. The cavalry uniforms of this era are magnificent to look at: the French cuirassiers, the bearskin hats of the Grenadiers a Cheval and the Carabiniers, the gaudy hussars and the chasseurs, and the splendid looking dragoons with their classical helmets, green coats and a rainbow of facing colors (yellow, blue, red, pink and more).

Fourth Element: Interesting personalities. The French army has personality, and then some! What a cast of characters when one can select from such different personalities as Davout, Lannes, Murat, LaSalle, Bernadotte, Ney and many others. But it doesn't just stop at the corps level. The French army had a deep bench of talent at the divisional and brigade levels, with many of these individuals rising through the ranks on merit, to eventual corps command after 1807.

I plan to organize my French army as a division of 8 battalions with supporting divisional artillery. I will probably use Gudin's division in Davout's III Corps circa 1806 as my model for the layout. My cavalry force will consist of the III Corps light cavalry, notably the 1er Chasseurs a Cheval and the 7e Hussars and maybe a unit of cuirassiers and dragoons. French cavalry regiments will have 36 to 48 figures, representing three squadrons.

I will provide more information on the French organization later in the week as well as my initial thoughts and ideas for organizing the Prussians. The rules will be a variant of the BAR rules that we use for the Seven Years War. We haven't written the rules yet, so there is a considerable amount of play testing ahead of us. However, I like the basic system of firing, melee and morale that is used in BAR, so I will probably use this as the framework for a unique set of Napoleonic rules for the 1805-1807 period.
Posted by Der Alte Fritz at 4:59 PM