Setting Up the Kolin Terrain

Today I cleared off the Winter terrain from my game table and moved things to the Summer of 1757, where I am experimenting with some scenarios to stage the Battle of Kolin, fought on June 18, 1757. Probably the best battle map I have seen is the one by Christopher Duffy in his book, The Army of Maria Theresa. It is a good starting point for laying out the table and seeing how many battalions can comfortably deploy in various parts of the table.

The picture below show my third and final attempt at transferring the Duffy map into suitable wargame terrain.


So my intent is to game the Prussian assault on the Austrian right flank at Krechor village and stretch it west to as far as the little hamlet of Chozenitz. It was in this ground that Hulsen's and Treskow's advance guard and left wing, respectively fought. I do not intend to model the Prussian refused right wing, opposite Przerovsky Hill. In this manner, I can also eliminate Bevern's right wing troops from game consideration and thus reduce the number of wargame figures that I will need for the game.

The scenario will begin with Hulsen's advance guard attacking the Croats in Krechor village and driving them out. While this is going on, Daun is sending the Austrian division of Wied to his right flank to counter Frederick's attempt to outflank the Austrian army. Once Wied's troops pitch into the fight, I will allow Starhemberg's and Sincere's divisions to march from the Austrian left to its right using a timed arrival mechanism in the game.


The remaining portion of the Prussian left wing, under the command of Hulsen, will start the game marching up the Kaiserstrasse. Each Prussian command consists of four elements too, with three infantry commands (Hulsen, Treskow and Manstein) and three cavalry commands (Zieten, Krosigk and Pennavaire). This gives me 12 Prussian battalions and 12 cavalry regiments. I organize my cavalry into "squadrons" of 12 riders with two such squadrons comprising a regiment.


I will have to create some sort of deus ex machina roll of the dice to determine whether Treskow follows Frederick's original battle plan, calling for him to follow Hulsen in a march around the Austrian right flank, or will the combination of sniping Croats in the cereal grass and Frederick going battle mad and sending all of his troops on a frontal assault of the Krechor Hill?

When I first set up the game table, I deployed Wied's division between Krechor village and the Oak Wood, four batallions in one line, and found that they took up about 4 feet of table space.  And then I would have to leave enough space to the left of Wied for Sincere's deployment of four batallions. If you look at the Duffy map at the top of this page, then you will see the area between Krechor village and Chozentiz and confirm that this is the area of the battle that I would have to set up, if I deployed he Austrian divisions into single lines of battalions.


The whole point of the game is to recreate the Prussian attack on Krechor village so the first idea (see paragraph above) might be the way to go. However, if I wanted to extend the ground to include the Prussian refused right wing, under Bevern's command, then I would have to shorten up the ground space between Krechor and Chozenitz. I shifted the terrain around a bit, and then doubled up the deployment of Wied and Sincere into formations with two battalions up front, supported by two battalions behind them.

This seemed to compress the battlefield a little bit, allowing me to place Bevern's refused wing on the table. I opted to go with the compressed battle terrain for my first stab at the Kolin scenario.

I am not going to depict the fight that Duffy calls, "The Cauldron" wherein both sides throw in everything they got in a desperate attempt to win the battle. I would like to try the Cauldron scenario as a separate game in and of itself. Christopher Duffy's map of "The Cauldron" is shown below. I would use this map to design a separate game scenario than the Krechor assault. 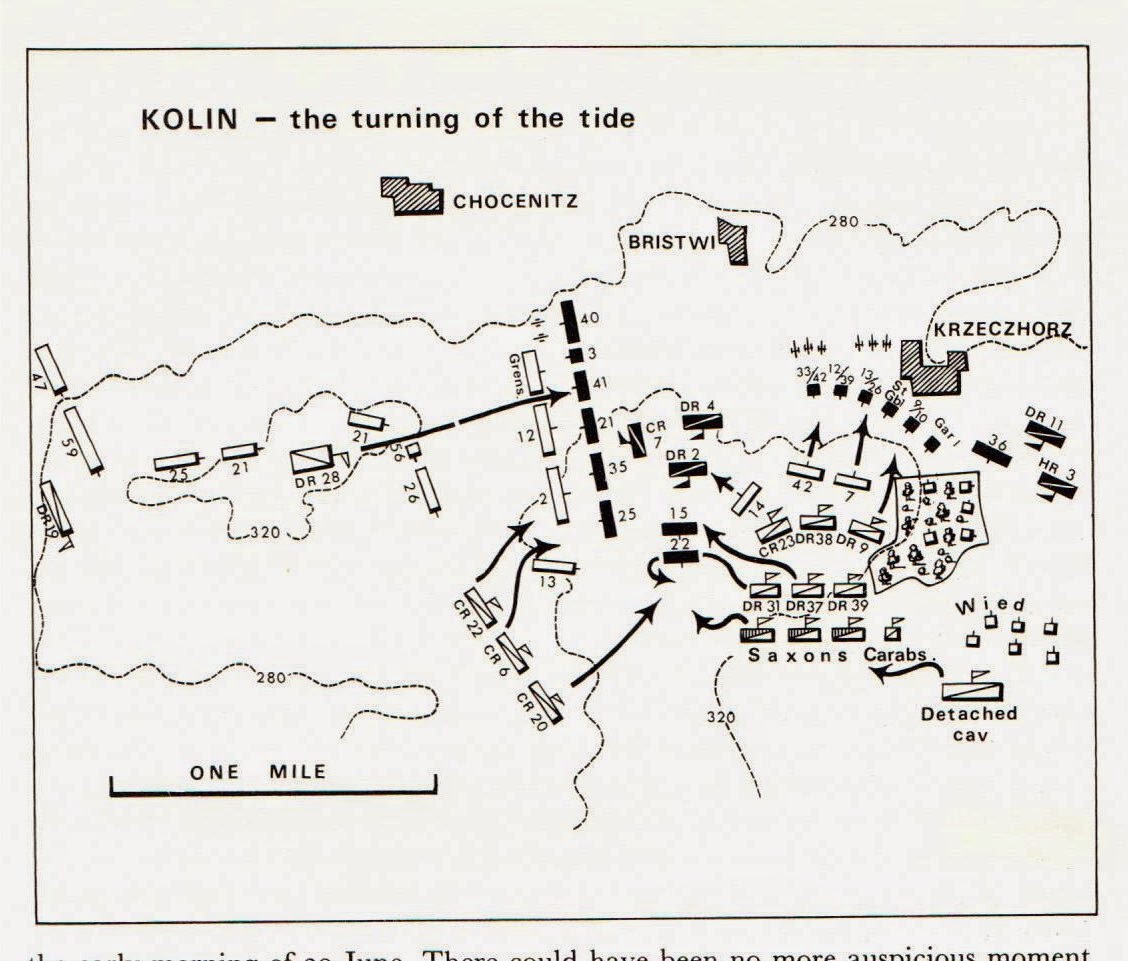 There is still a bit of tweaking to do before I am happy with the scenario. One benefit of laying all the troops out on the table is that I can see how many units I need to add to my wargame armies for this battle. Needless to say, I will be painting a lot of white coats and cavalry over the next 10 months as I shape the game up to present at the Seven Years War Association convention in March 2016.
Posted by Der Alte Fritz at 12:01 AM