I Am Off to Partizan! 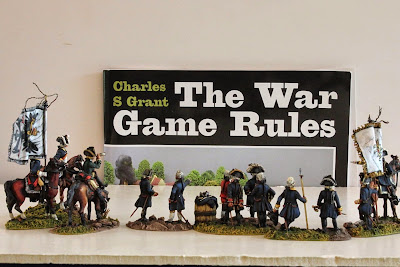 The wargame gods giveth and taketh, so it would seem. I had to miss this year's Seven Years War Assn. convention in March, so Mrs. Fritz decided that it would be a good idea for me to cross the big pond and attend a wargame show in the United Kingdom.

So I'm going to Partizan in Newark!

I leave tomorrow and will spend several days in London getting over the jet lag and doing a little site seeing (National Army Museum and Westminster Abbey are at the top of my list this year). Then I will take the train north to Coventry/Birmingham and stop in for a visit with Griffin Moulds so I can see first hand how miniatures are made. That would make the trip worthwhile on its own. 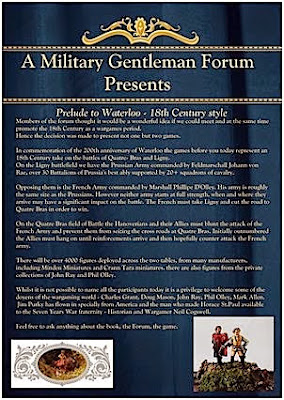 Unless your name is Clark Kent and you can read fine print, then read the game flyer above. However, for the rest of us, the text of the flyer is copied below:

A Military Gentleman of the 18th Century was written by John Ray and published in September 2013.Only 500 numbered copies of this limited first run were printed. This book of 304 pages has over 500 images, covering model soldiers, inspirational pen and inks drawings plus coloured military artwork specifically commissioned for this story.

Purchase of this exceptional book allows the owner to join the AMG Forum, where the hobby and all things 18th Century (and more!) are discussed and debated in what can only be described as a wonderful 'Private Members Club'

Members of the forum thought it would be a wonderful idea if we could meet and at the same time promote the 18th Century as a wargames period.Hence the decision was made to present not 1 but two games.In commemoration of the 200th anniversary of Waterloo the games before you today represent an 18th Century take on the battles of Quatre- Bras and Ligny. The games are based around those presented by Charles Grant in his publication 'The Wolfenbuttel War' and of course we shall be using his rules 'The War Game' suitably tweaked for the day.

Over 20 members of the forum are here bringing together  800+ years of wargames experience.
On the Ligny battlefield we have the Prussian Army commanded by Feldmarschall Johann von Rae, over 30 Battalions of Prussia's best, ably supported by 20+ squadrons of cavalry.

Opposing them is the French Army commanded by Marshall Phillipe D'Olley. His army is roughly the same size as the Prussians. However neither army starts at full strength, when and where they arrive may have a significant impact on the battle. The French must take Ligny and cut the road to Quatre Bras in order to win.

On the Quatre Bras field of Battle the Hanoverians and their Allies must blunt the attack of the French Army and prevent them from seizing the cross roads at Quatre Bras. Initially outnumbered the Allies must hang on until reinforcements arrive and then hopefully counter attack the French army.

There will be over 4000 figures deployed across the two tables, from many manufacturers, including Minden Miniatures and Crann Tara miniatures, there are also figures from the private collections of John Ray and Phil Olley. Whilst it is not possible to name all the participants today it is a privilege to welcome some of the doyens of the wargaming world - Charles Grant,  John Ray, Phil Olley, Mark Allen. Jim Purky has flown in specially from America and the man who made Horace St.Paul available to the Seven Years War fraternity - Historian and Wargamer Neil Cogswell.

I am hooking up with some of the members of the "A Military Gentleman" forum at Partizan, where we are collectively hosting a couple of games on Sunday, featuring Charles S. Grant and his The War-game Rules for our 18th Century games. John Ray will bring a small portion of his vast post-SYW era Prussians and test wills against Phil Olley and his French collection. A number of other members are bringing their own troops, and based on some of the pictures that I have seen on the forum, there will be a lot of superbly painted SYW era troops on the table (in 28mm of course).

Kudos must go to Graham Cummings (Crann Tara Miniatures) for his tireless devotion to organizing the game, its logistics and playing the role of chief cat herder. Without Graham's efforts, this game would not have progressed beyond the idea stage.

For me, the best part of my visit to Partizan will be the opportunity to meet a number of acquaintanences and friends that I have made over the years as  a result of the Internet. I look forward to matching up the faces with the names and having the opportunity to chat with everyone. So if you happen to be going to Partizan, or even thinking about it, please do stop by at the AMG game and say hello.

Griffin Moulds Update
I have a several large boxes of figures on the way from Griffin Moulds, scheduled to arrive tomorrow (hopefully before I leave for the airport). I don't know exactly what is in the box, but Graham Cummings visited Griffin Moulds last week and hinted that some of the new figures will be in this shipment. So I am holding my breath with anticipation. I have also learned that Griffin Moulds has moved to a new location, added more employees to work on the casting part of the business, and made a couple of administrative hires, that collectively, should start to make a big dent in the order backlog and get the regular lead times for castings back to the 3-4 week range.

I should also report that Richard Ansell has started working on the AWI Hessians for the Fife & Drum figure range so we will probably start seeing some pictures of the greens within a couple more months.

All and all, there is much to look forward to in the coming months.

I look forward to meeting more of my blog readers at Partizan.