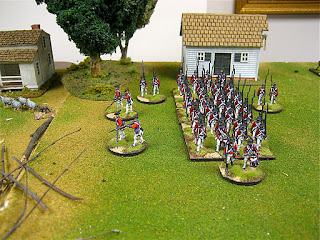 British Brigade of Guards during the American Revolution (the grenadiers with the cap-hats are in the back of the column). Fife & Drum Miniatures painted by Der Alte Fritz.
This morning there was a thread on TMP inquiring about good music to listen to whilst gaming the AWI. One of the selections was The British Grenadiers, which to my ear, is one of the best military songs ever. I don't know how to embed a You Tube thingy into this blog, but if you follow the link below, it will take you to several nice recordings of
The British Grenadiers:
Link
Posted by Der Alte Fritz at 12:01 PM