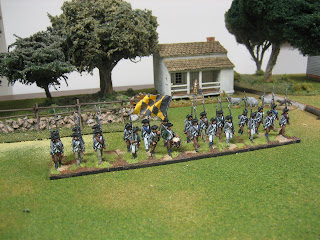 Here is a picture of the 6th Maryland Regiment in the American Revolutionary War, circa 1777. I wanted a change of pace from painting blue coats, so I selected this unit from a picture in the John Mollo book on AWI uniforms.

I am now up to seven Continental regiments and three militia regiments, having finished the third militia battalion this evening. I want to paint one more militia unit for the brigade. The militia commander will likely be Colonel John Cadwalader of the Philadelphia Associators. They did not fight in the Philadelphia Campaign of 1777, but they did make a big contribution during Washington's Winter campaign at Trenton and Princeton .

I have way too many British light infantry NCOs for some reason, so I am considering lopping off their heads and putting them onto some Continentals marching. Thus the Continentals will have brimmed hats turned up on the right, with a feather in their cap (and they called it maccaroni). I did an experimental figure using one of the Continental mounted officers and a British brimmed hat - it is really turning out nicely, so this gives me the confidence that I can convert a small unit of, say, 20 figures and paint them as one of the Philadelphia Associator battalions. Again, I'm doing this to have some variety in my Continental army.

I will post a picture of the Delaware Regiment tomorrow.
Posted by Der Alte Fritz at 11:38 PM