I have been doing some minor conversions lately, swapping heads from a British light infantry officer's brimmed hat, nattily turned up on the right side, for the tricorned head of a Continental general. I wanted to have a militia officer to command my growing American militia brigade, so I decided to get out the Exacto saw, wire clippers and flat files to do the dirty work. 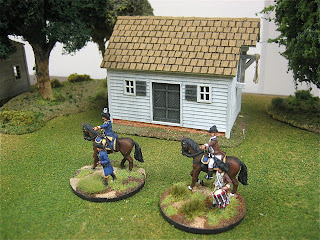 The two photos above essentially provide a "before" and "after" view of the figures in the conversion cycle. The brigadier general in blue is the standard AC1 mounted general figure from my Fife & Drum range. A militia officer was painted in a blue Continental style coat and included in the little diorama that makes up the command stand. Cadwalader (in brown) has an American Continental drummer added to his base to create more interesting things going on in the stand.

The conversion operation is relatively easy. The first step is to take a fine tooth Exacto saw (from the mitre box set) and decapitate the heads of both figures. Then, I take a flat file and file the torso-neck join flat and then drill a hole into the torso with a pin vise. The same procedure is used on the British light infantry head. Then I cut a small piece of metal rod (offcuts from my North Star spears) and fit it into the hole in the torso. I then fit the head into the pin to make sure that it fits snuggly. Sometimes you find that the head sits too high, so you have to drill a little deeper into the torso piece. Always do the deepest drill hole into the torso - obviously you have more metal to deal with as you don't want to ruin the head.

Once you have a good fit, then place a small dab of superglue into the torso, insert the pin, and glue on the head. At this point you can turn the head a little bit if you so wish. You are now ready to prime and paint your figure.

I am tempted to try this on a whole battalion of figures. I would like to make a 20-figure battalion of Philadelphia Associators (basically trained militia) using Continental torsos and chopping off some more British light infantry heads from the vast supply of NCOs that I ended up with. I can never hope to sell so many NCOs, so this is a good use for the figures. 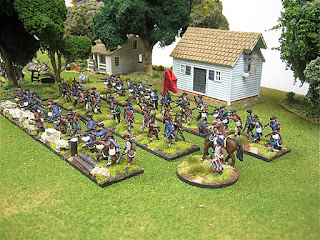 The above picture depicts my growing collection of militia units - three so far. I completed the Hanover Associators, shown in the third row with flag, over the weekend and finally had a chance to base them. The unit is comprised largely of firing figures, although I mixed in all 8 of the available militia poses. I think that they all fit together quite nicely. 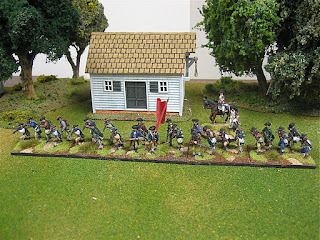 A solo view of the Hanover Associators - GMB Designs flag and Herb Gundt barn and trees enhance the look of the picture. You can see Colonel Cadwalader in the back ground.

I had a nice militia flag from GMB Designs that I wanted to use - the red Hanover Associators flag. Most militia units probably did not carry standards, but as you know, I sharp looking flag can really enhance the look of a battalion of infantry. I also plan to add a battalion of Lancaster Milita given that one of my ancestors, a Lt. Colonel Edwards, commanded the 8th Battalion of Lancaster Militia, if I recall correctly. In my mind, these fellows will probably look a wee bit more formal than your run of the mill militia, so I will probably have more similarity in poses and coat colors (blue, I suppose).
Posted by Der Alte Fritz at 7:58 PM