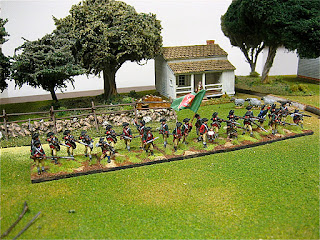 I have been busy painting American Continentals at a feverish pace these past few weeks. So much so that it has come at the expense of posting pictures of the finished units. I took a few photos this evening to catch up on the Maryland/Delaware brigade that I've been painting.
I was sort of getting tired of painting Continentals in blue coats and white breeches, so I was looking for something different. The first unit was the 6th Maryland Regiment in grey jackets with green facings. Then I did Hall's Delaware Regiment and made them look more formal than my other Continental units, as befits their reputation for discipline, spit and polish. 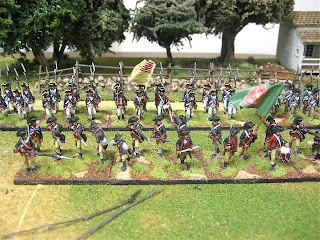 A closer view of the regiment, showing the mix of Continental and militia figures from the Fife & Drum range of figures. The flags are copies made from Clarence Harrison's Quindia Studios blog - an excellent source for AWI flags.


My next unit was the 1st Pennsylvania Regiment in Continental service. They wear the green coats, faced in red, with red waistcoats and buff/tan breeches. This is a conjectural regiment because the men never had the opportunity to wear this uniform. As the story goes, the regimental colonel had ordered these nice looking uniforms to be made. They were stored somewhere near New York City and thus captured by the British after Washington's retreat from the city in 1776, before they could be allocated to the 1st Pennsylvania. This unit was basically one comprised of riflemen, so it is more likely that they wore hunting shirts or buckskins.

From Don Troiani's book: "Soldiers of the American Revolution":

"Upon assuming command of the 1st Continental Regiment, Lt. Colonel Edward Hand took great pains to properly equip his riflemen and instill a sense of esprit de corps. New uniforms were ordered from Pennsylvania, in addition to a fine silk standard or color for the senior regiment of the army. The latter was described by Hand on March 8, 1776 as a 'deep green ground, the device a tiger partly enclosed by toils, attempting the pass, defended by a hunter armed with a spear...on a crimson field the motto Domari nolo. Made in Philadelphis from Hand's description, the standard was forwarded to the rifle regiment, arriving in time to be carried during the fall 1776 campaign; this stalwart veteran of Revolutionary service has survived until the present, carefully handed down by descendants of Thomas Robinson (the regiment's third commander), until donated to the Pennsylvania Historical and Museum Commission."

The regimental uniforms were to match the colors of the standard: short green coats with scarlet or red facings, with buckskin breeches. However, most of the woolen uniforms sent for the enlisted men were in store at Fort Lee and captured when that post fell on November 20, 1776. Thus most of the men continued to wear their traditional riflemen's dress of linen for the remainder of the fall and winter, while many officers, who had privately purchased their own uniforms, were better clothed for cold weather."

Be that as it may, I thought that the uniform is one of the snazzier looking ones in the whole war, so I figured that in my little AWI world, the regiment received their uniforms before they were captured by the British.
Here is a picture of the whole "Maryland Brigade" as it is so far: 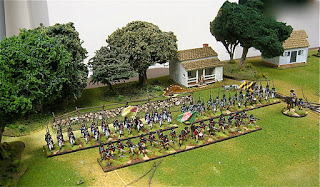 I will post more pictures of the Delaware and Maryland units over the next several days.
Posted by Der Alte Fritz at 8:16 PM