Having recently painted some Roman Velites light infantry, I thought that I had better paint some light infantry for my Carthaginian army as well. The HaT light infantry box has four different poses and four figures of each pose, for a total of 16 figures per box. The figures are 1/32 plastic figures (54mm).

As you can see in the pictures below, the skirmishers form a protective zone around the war elephants. 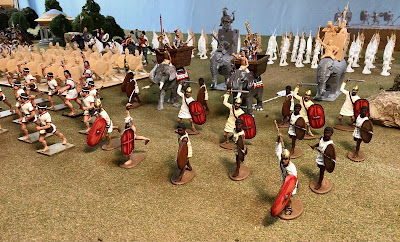 Here are some pictures of the HaT Carthaginian light infantry.

Here are a couple of close up pictures of the Numidian figures and one Celt. It is hard to get all of the detail of the figure into a picture of dark skinned figures, but they do have nice detail on their faces. The figures were easy to paint due to the lack of equipment that one needs to paint. 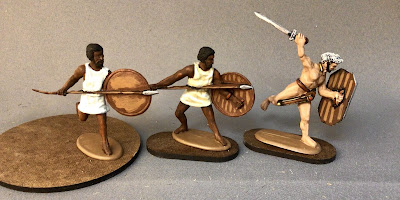 I liked the way that the Celt turned out. I used the Reaper Tanned Skin triad of paint colors, which has a subtle change from dark to light hues. I don't like seeing pictures of figures (naked or bare chested) that have a severe dark red-brown color as its shade because it is too stark a change from the red-brown to the skin highlight. The Reaper triads have a more gradual and subtle change from shade, to base color to highlight.