Governor’s Palace in Khartoum is Finished

This evening I finished the construction and painting of Sudan Building Number 6, the Governor’s Palace in Khartoum. This building served as General Gordon’s residence and headquarters. It is where he made his final stand and met his demise.

Contrary to popular myth, Gordon did not die passively on the steps to the palace. Quite rather, he fought the Dervish, room to room, along with one of his servants, Khaleel Orphali. Orphali survived and left us with a rather detailed account of Gordon’s demise.

The palace model had been sitting partially assembled for a couple of months and I decided to power through some of the drudgery bits ( the Windows in particular) and get the model completed. The walls are built with 1/2 inch thick black foam core board and the roof is made with bass wood. The decorative trim was purchased at Home Depot. 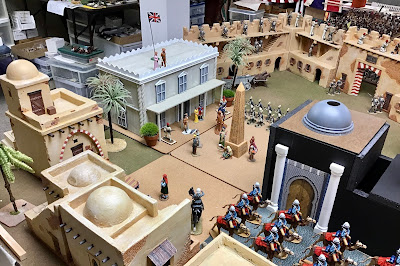 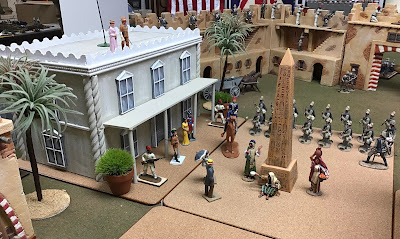 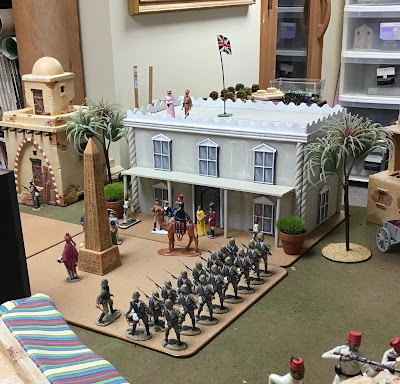 I used chalk finish paint for the painting and used a lighter chalk paint to dry brush some texture onto the walls. The windows were a pain to make. The basic shape was made from balsa wood which is an easy material to work with. The hard part was making the door trim and the mullions on the windows. These were made from tiny wood craft sticks that I purchased from Michael’s Stores. Each little piece had to be measured and cut with a tiny Exacto saw and miter box set. Eventually I figured out that I could cut the match sticks with a pair of scissors.

I plan on building a balustrade For the balcony.

There is a lack of clarity with regard to the appearance of the Governor’s Palace. The original structure was destroyed by the Dervish after they captured Khartoum. A new palace was constructed on the same site using red brick and Georgian style windows on the upper floor.

We do have a sketch of the building’s floor plan layout which provides clues to the palace’s Appearance. It was a two story building with two wings that were single story structures. This gave the palace a u-shape appearance with an iron fence across the open part of the U.


For my own model, I decided to make just the central two-story structure in order to economize on its foot print on the game table. I might add the two wings at a later time.
Posted by Der Alte Fritz at 1:32 AM