I completed the second squadron of the DR3 Dragoons (Meinicke) in Prussian service, over the weekend and present them here for your review.


So I set them up in my photo booth for their first pictures and decided to create a vignette in which King Frederick II of Prussia presents the regiment with their colours for the very first time. I like this idea so much that I think that I will do it every time I add a new regiment of infantry and cavalry to the Prussian and Austrian armies. The information will then be recorded in my roster book for the army and include such information as:

And now here are some pictures of the first and second squadrons of the DR3 Dragoons:

All figures are from Minden Miniatures and the colours are from GMB Designs, as usual for me.


Here is a teaser of a little project that I am currently working on. I have a 20-figure regiment of White Hussars (RSM figures) and I need to build them up to 24-figures for my current game organization. I did not have any RSM figures on hand to fill out the unit, so I drafted two each of the Minden hussar officers and trumpeters to add to the unit. The sizes of the figures are comparable, so this should work. I intend to mix the Minden figures into stands with one RSM figure and one Minden figures, although this is not shown in the picture below. 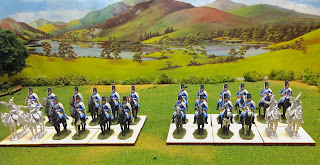