With the 3-day holiday weekend, I was able to put together enough painting time to knock out a 12-figure squadron of the DR3 Dragoon Regiment in the Prussian army of the Seven Years War. I have another 12 figures to paint before completing the regiment and I hope to do that over the course of the next week.

I decided that my Prussian cavalry contingent was heavily weighted towards cuirassiers, having 3.5 regiments of those and one regiment of Bayreuth Dragoons (which I count as two regiments because it is twice the size of a normal Prussian cavalry regiment at 10 squadrons rather than 5.

The Meinicke Dragoon Regiment is one of those units that probably finds a place in every Prussian wargame army. It has the unique Rose colored facings (cuffs, lapels and collars) and horse furniture that make it a very colorful addition to the otherwise drab looking Prussian dragoon uniforms. 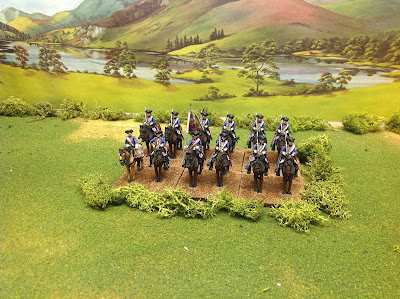 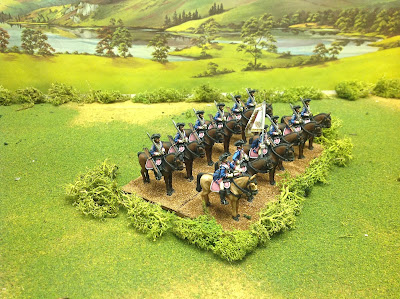 Once the final 12 figures are painted, I will consider my Prussian heavy cavalry arm more or less completed, although I will need to add more hussars in the future. This new addition gives me plenty of cavalry to game Reichenberg, Prague and Kolin in the 1757 Campaign, which I will feature in my convention games at this year's SYWA convention in South Bend, IN at the end of March this year.
Posted by Der Alte Fritz at 1:13 AM