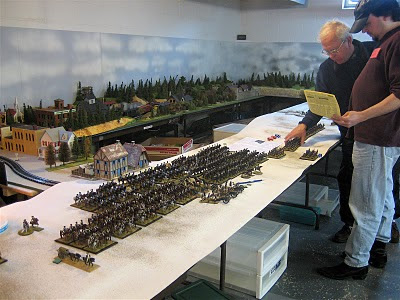 Bill Protz & Chuck LaPine ("Lucky Chucky") take inventory of 18 squadrons of Prussian heavy cavalry that were positioned to break the apex of the Russian salient in the Great Redoubt at Protzberg. (click photos to enlarge).


This past weekend a group of ten descended on the delightfully-named town of Brown Deer, Wisconsin, home of our host, Bill Protz (he being the lucky owner of a 6ft by 24ft wargame table) to play our annual Winter Terrain Game.

This year's winter game featured the Prussian army attacking an allied army of Austrians, Russians and Saxons somewhere in Silesia, during the winter of 1761, near Breslau. The terrain featured a great redoubt that was eerily similar to that of Borodino. We had a roll of the dice to determine which team would get first choice of terrain. I rolled a couple of 'sixes' and won the roll-off. Now there is one thing about redoubts and the salients that they form that I can tell you about: I love to attack them, and I hate to defend them. So I conceded the defensive position to the Russians and our Prussian team headed upstairs to plan our attack while the allies deployed their troops.

You can read Bill's excellent after action report on our "Campaigns in Germania" blog at:

http://campaignsingermania.blogspot.com/2011/01/great-redoubt.html
The table was divided into three zones (left, center and right) and I shall not bore you with too many details of the action on the flanks, as Bill's report does an excellent job of reporting the events that unfolded there. In my mind, the center was the most important part of the battle, so I will post a few pictures of what happened there. 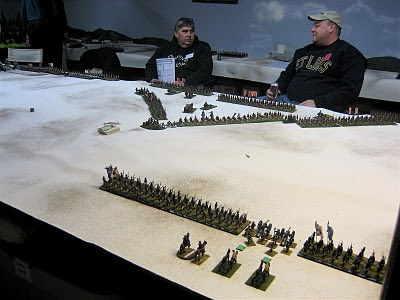 You can barely detect the faint outline of the redoubt in the center. Its boundaries are etched by the positioning of the Russian infantry in this sector, forming a triangle deployment with a battery of guns at the apex of the triangle.


As commander of the Prussian army, my plan was fairly straight forward: hit the redoubt with overwhelming force at its apex. With that in mind, I had Bill (Prussian cavalry commander) deploy all of his heavy cavalry in the center. A battery of three 12-pound Brummers would pound away at the tip of the redoubt while two brigades of infantry (Derek on the right and Chuck on the left) would attack the sides of the redoubt. With the infantry weakened by firepower, the cavalry would then roll foreward and deliver the coup de grace to the Russian army. 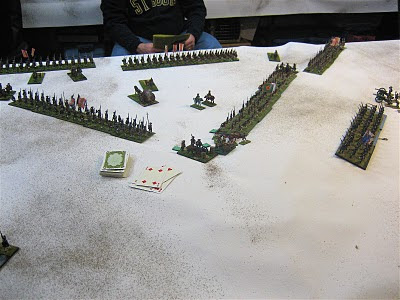 Elements of Derek's Prussian righthand brigade were whittled down by the Russian lead as they crested the Great Redoubt. There were 3 more battalions plus two guard grenadier battalions from our reserve approaching from behind Derek's front line troops. 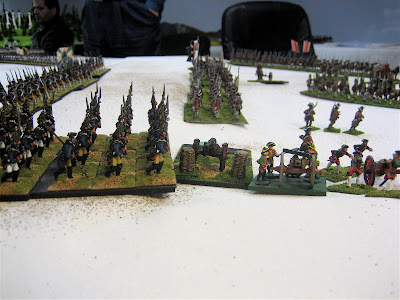 Meanwhile, Chuck's lefthand Prussian brigade hit the left side of the redoubt and plowed into the flank of the Russian artillery battery, causing them to rout. The Prussian grenadiers continued on into the flank of some Russian infantry, who refused to let an attack in their flank dislodge them from the redoubt. Chuck's attack had the unintended consequence of blocking the field of fire of my three Brummers, which I had moved forward and deployed atop the great redoubt. I had to wait three turns for the infantry melee to conclude before I could finally open up with some cannister at point blank range. 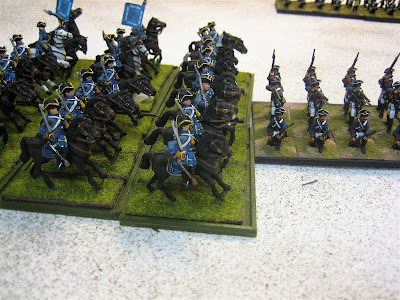 Oops! A regiment of the Saxon Von Bruhl Dragoons seemingly appeared out of nowhere and surged into the flank of one of Derek's grenadier battalions, which was attacking the righthand face of the redoubt. The grenadiers, in rather spectacular fashion (or else out-of-this-world dice rolling), fended off the Saxon cavalry, with a little help from the Zieten Hussars (see below). 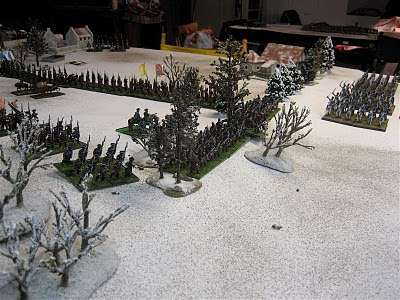 The Prussian von Zieten Hussars were moving up on Derek's right flank, to protect it from counter-attack. And while they failed to stop the initial charge of the von Bruhl Saxons, they were perfectly positioned to hit the von Bruhl's in their flank, thus helping to run them off the field. Zieten himself led the charge and pursued the Saxons onto the back table. Von Zieten fell victim to his impetuosity, later being captured by the Austrian cavalry. 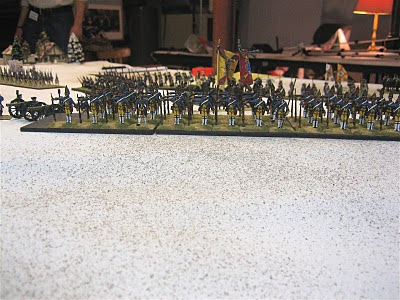 Derek then brought up the Prussian Garde Grenadier battalion (IR6) - Suren figures, by the way, to breach the righthand face of the great redoubt. Von Seydlitz then unleashed his 18 squadrons of death upon the Russian battalions that were still holed up in the great redoubt. Here you see the Prussian Gensdarmes (CR10) hacking away at some stalwart Russians, who seemingly held on to the very last man, in true Russian fashion (some nifty morale checks by Russian commander John Beck). 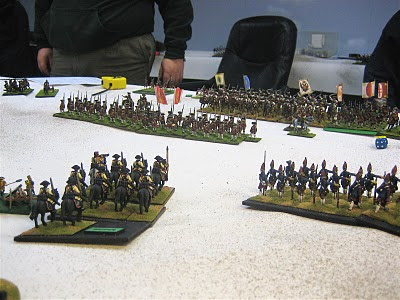 Another squadron of Gensdarmes crested the redoubt. 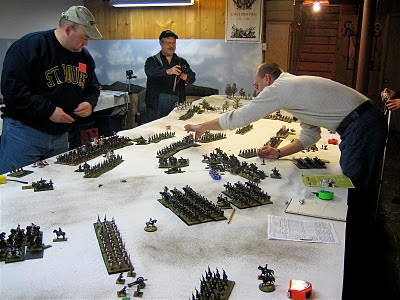 It's checkmate for the Russians as Seydlitz's cavalry surges over the redoubt and mops up depleted Russian infantry units on the lefthand side of the redoubt. Meanwhile, the Prussian infantry has secured a lodgement inside the redoubt with more reseves coming forward.
Posted by Der Alte Fritz at 10:47 PM