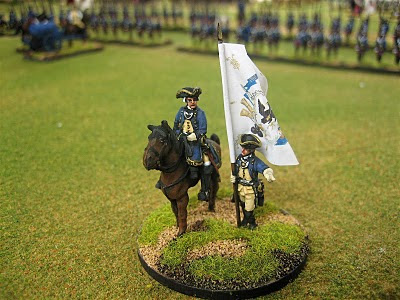 
I was browsing through my copy of Hans Bleckwenn's uniform books on the Prussian army of Frederick the Great when I happened to come upon a picture of the artillery uniforms and their regimental flags. I had always intended to have a separate artillery commander for my Minden Prussian army, so when I saw that the artillery had its own flag, I knew that I had to put one on the eventual command stand.


The flag itself looked like it might be a tad beyond my painting skills, were I to hand paint it, so instead, I took the book to the copy shop and photocopied the flag at 33% of its original size, versus the picture in my book. This reduced the length (the fly?) to about one inch and the width (the hoist?) to about an inch and a quarter. This turned out to be a perfect fit for the officer on foot, who would be holding the flag. I also tried reducing the flag to 45%, but while the added size displayed the flag details much better, it was way to big for the figure that would be holding the flag.

After reducing two copies of the flag, I cut both pieces out and glued them to a sheet of plain white paper so as to have the two sides opposite one another. Then I photocopied this version and produced my own flag sheet. White glue was applied to the underside of the flag and then the paper was pressed together around the flag shaft. Then I took a small paint brush and used it to shape and curl or furl the flag so that it would look more natural. 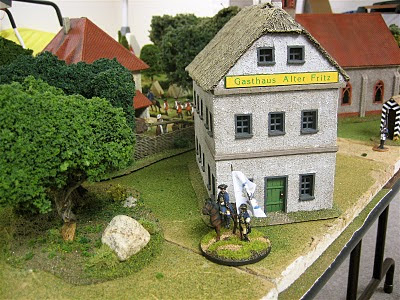 Colonel von Moller shown outside the Gasthaus Alter Fritz, modelled by Herb Gundt after an inn at Hochirch (across the street from the church where IR19 met its demise). Herb made all of the buildings, trees and the guard house shown in the picture. Click the picture to enlarge. 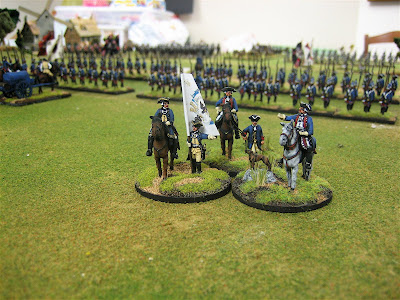 
The foot figure holding the artillery flag is the Minden Prussian officer on foot with spontoon. As with most Minden figures, you are required to drill out your own hole in the officer's hand, which is a simple matter to do if you have a pin vise tool. So instead of inserting the spontoon in the resulting hole, I clipped off a section of a North Star 100mm spear with flat head spear tip and used it for my flag pole. This flag pole will never break off due to the fact that the holding hand has been drilled out. I like it this way.

Finally, I glued the mounted Prussian officer (also a Minden figure, but mounted on an RSM horse) onto a 1.5" diameter round base from "Georgo Bases" -- this is my standard size for command stands in my Minden armies. Then I glued down the flag bearer and terrained the base with spackle compound, covered in railroad ballast, then washed with brown ink and flocked with static grass. The final vignette is quite eye pleasing, if I do say so myself.
Posted by Der Alte Fritz at 11:43 PM