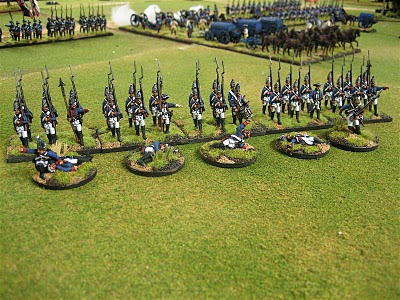 Grenadier Battalion von Wedell (1/23) with assorted casualty stands scattered in front of the battalion. Casualties are all Perry AWI Hessians, "converted with paint" plus one Front Rank fellow (center with raised arm). The "healthy" grenadiers are Minden Miniatures. (Click pix to enlarge the view).


It has been a while since my last posting on the blog, but that belies the fact that I have been very busy working on my figures for my Minden Project for the Seven Years War. The annual Seven Years War Association Convention is getting close at hand and if I am not careful, I shall run out of time and not have my Minden armies ready for action at the convention on March 21-23, 2011 in South Bend, Indiana.

I have been painting casualty stands for the Austrian and Prussian armies lately, and you can see some of the results in the picture above. The concept is that each battalion will have 3 to 5 round casualty markers that I will place on the table top once a stand of figures is removed from play. Each battalion has five stands, so I probably do not need any more than 3 casualty stands per battalion as it will be a rare occurance for every stand in the battalion to fall in battle.

Once you lose six figures, a stand of marching figures is removed from the table. The player will then set a round (1.5" diameter) casualty stand on the field in the spot where the stand was removed. Thus, as the battle progresses, we should see an accumulation of round casualty stands on the table and sort of keep track of the ebb and flow of the action. By the end of the game, we can visualize where the fighting was heaviest by the placement of casualty stands.

The stands serve a second purpose as well: the side that has the most casualty stands on the table top at the end of the game, will lose a Victory Point to the opponent. The most VPs in the game will determine the winner (or at least, it will be one of the variables). 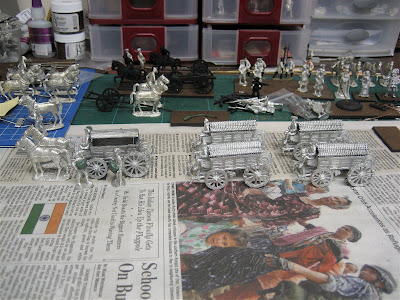 Front Rank wagons, RSM horses, and Minden wagon drivers are shown above. I've also used some of the pioneer figures as hired hands to carry sacks of gun powder or baking flour, whichever the case may be. The sacks are made from epoxy putty and fit nicely into the hands of the pioneers.


I spent a good part of Saturday evening cleaning and assembling some Front Rank artillery munitions wagons that will be part of the artillery park in my game. As you might recall, each cannon model will be supported by a stand of 2 matrosses, 1 stand with a supply wagon, and 1 limber stand, all located behind the gun model. This will represent the depth of the artillery battery or section. So I have to prepare supply wagons for all of my Austrian cannon. The Austrian wagons will use the wicker cover on the wagon, while the Prussian wagons will use the wood cover. This will make it easy to distinguish the two armies' batteries (although Austrian Yellow Ochre and Prussian Blue will also do the trick).

Finally, I completed the first battalion of another Austrian regiment: Regiment Botta, in blue facings as well as a couple battalions of Austrian grenadiers. I will post pictures tomorrow.
Posted by Der Alte Fritz at 1:26 AM