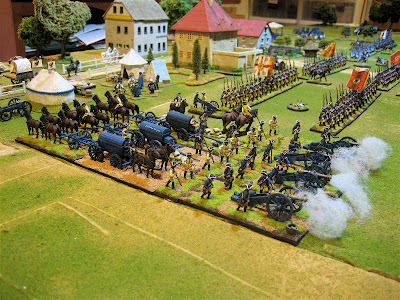 This was one of my favorite photos of 2010, depicting the Minden Prussian battery in full fig, as Harry Flashman might say. 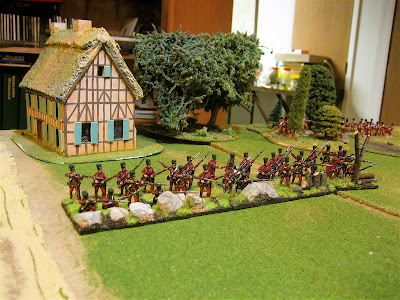 This was one of my favorite painted units during 2010 - the Ottokaner Liccaner Croats from Minden Miniatures.

Happy New Year everyone, and may you all have a prosperous and healthy 2011. I was going to post my annual "year in review for 2010" before the sands of 2010 flowed away, but I was striken with a flu virus the past two days and sitting in front of my computer was a no-go as I could barely get out of bed. I'm still a little tired and dizzy, but my health seems to be improving as of 2PM on January 1, 2011.

As far as New Year's Resolutions, hmmm, I think that I will give up sugar again and see if it will help me loose a little bit of weight. It worked two years ago, when I lost 10 pounds, but a lot of the weight came back between the holidays as Mrs. Fritz and I discovered egg nog and scones at the new gourmet food shop that opened recently in Hesse Seewald. On the wargame front, I want to try and play some solo games this year with my Minden armies. In general, I would like to do more gaming and less painting -- afterall, we do collect all of these miniatures with an aim for eventually fighting battles with them. Too often, I forget about this and delve deeply into painting, to the exclusion of all else.

The first of the Fife & Drum moulds are flying over from the UK to the USA and I am hopeful that we will get the British Guards and Lights and the American Militia into production by the end of January. I am told that Continentals are next in the que on Richard Ansell's sculpting table. We will probably go back and forth between American and British forces so as to keep things even for both sides. It doesn't look like we will have a UK distributor, but you will be able to purchase Fife & Drum Miniatures directly from Battleroad Games & Hobbies.

January 2010
The new year opened with an interesting wargame at Chez Protz, featuring the Russian army of Count Apraxin and the second tier Prussian army commanded by the Duke of Bevern, somewhere in East Prussia. It was a nice Prussian victory with a double envelopment of the Russian flanks by the Prussians. 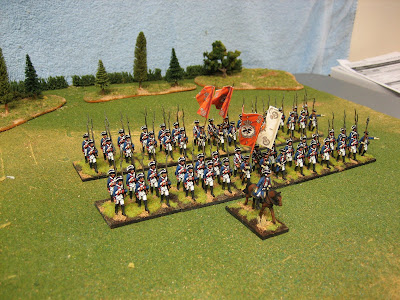 My new Seven Years War project using exclusively Minden Miniatures Austrians and Prussians got underway as I completed the first Prussian regiment (60 figures divided into 2 battalions of 30 figures) in January. Appropriately, I chose IR1 von Winterfeld as the first regiment in my Prussian army. You can see the picture, above, of the whole regiment, complete with GMB Designs flags.

February 2010
I hauled out the winter terrain, made by Herb Gundt along with snow mats from The Terrain Guy, for a refight of the Battle of Mollwitz, which took place on the snow covered fields of Silesia in April 1741. The game resulted in a Prussian victory that seemed to follow its historical source, with the Austrian cavalry riding down the Prussian cavalry while the Prussian infantry secured the victory in the center of the field. This was a play test for an eventual convention game at the SYWA Convention in March 2010. 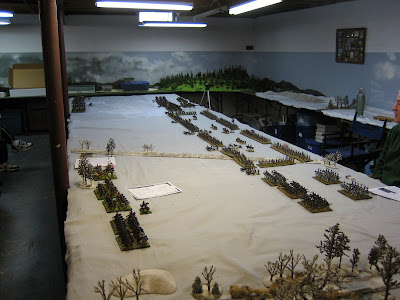 The battle of Mollwitz, replayed in February 2010.

On the painting front, I completed IR5 Alt Braunschweig and the 1/23 Wedell Grenadier Battalion, using Minden figures. I also started the first dozen of the new Minden Prussian dragoons, painting them as the famous Bayreuth Dragoons (DR5).

March 2010
This month featured some good things and quite a few bad things. On the bad side of the ledger, we had another flood in our basement and had to get the chimney caps replaced, both of which put a big dent into the national exchequer of Hesse Seewald. Fortunately there was not much damage in the basement, so that was good. We had the pipes routed out as roots were clogging them up, causing the sump pump to work extra hard and burn out. We now have the problem fixed.

On the disappointing side of things, my colleagues in the SYW Association did not feel that my presentations of Leuthen and Mollwitz were worthy of the Mitchell Cup for the best in show game. I am not sure why this group continues to overlook my efforts to put on a fine game year after year, but this year was particularly hurtful for me as even the judge was raving over how good my games looked. I know that I put on the best games that I have ever done in my entire career in wargaming and can do no better. So I needed to let this pass and just conclude that my colleagues are never going to give me the honor of winning the Mitchell Cup. With that in mind, I endeavored to "get out of myself" and plunge ahead into new waters, as we shall see in April.

Here are a couple of photos from the Leuthen game at this year's SYWA convention. 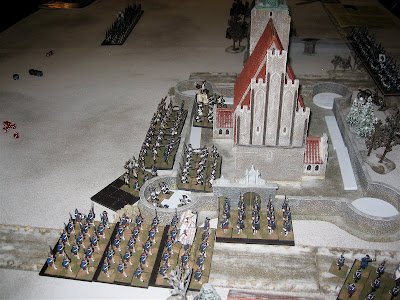 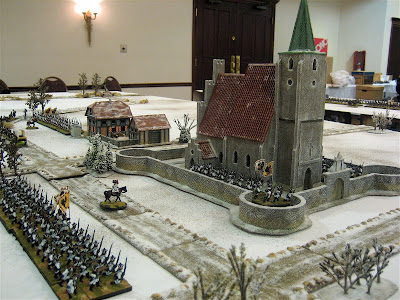 Austrian forces deploy in the village of Leuthen

On the painting front, I completed a battalion of Minden Prussian jagers (24 figures, later increased to 30 figures). I based them in a single rank, three per stand, with the same frontage as a formed battalion. This way, one can easily see that they are unformed troops by looking at the stands, yet they don't take up any more frontage if deployed in two ranks.

April 2010
I believe that Bill, Randy and I hosted a Fontenoy game at the Little Wars convention this year - my memory is a little faulty on this, but I definitely recall that the French crushed the British with another one of those famous wargame double envelopments of the British line. It was not a pretty thing to see if you are a fan of the British army, as I am. Sigh. Oh well, it was a good game nonetheless.

On the painting front, I started working on vignettes to improve the overall look of my wargame table. This has several benefits: they are fun to work on and advance your modeling skills, they look good, and the creativity helps me get over percieved slights mentioned in March. The vignettes proved to be very therapeutical for me. 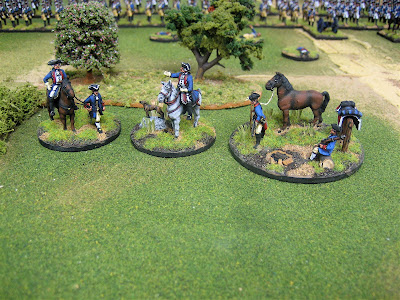 The Marshal Schwerin command figure in the center was my first major figure conversion. I clipped off the right arm of an RSM Prussian general, added a wire armature for his arm, and covered it with green epoxy putty so that the arm is now pointing at something. 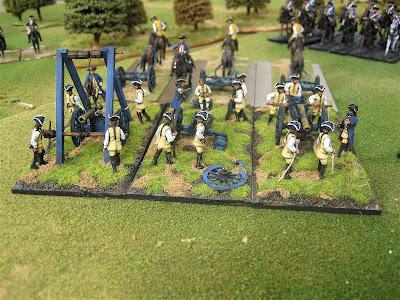 I used the Minden pioneer figures as Prussian artillery workers in the three vignettes shown above. With a little bit of minor arm movement and some imagination, you can have these wonderful figures doing practically anything!

May 2010
The Der Alte Fritz Journal surpassed the 200,000th visitor milestone some time on May 9, 2010. I am very honored that so many people take the time to visit my blog and want to thnk you all again for your support.

There were no games played this month, so I focused more time working on vignettes (The Die Hard Dragoon, Dragoon Officer with Telescope and the Artillery Hoist). I also completed the first battalion of IR49 von Diericke fusilier regiment, a few more Prussian dragoons and Croats.

By the end of May 2010, my Minden Prussian army was nearly completed with 8 battalions of infantry, 1 jager battalion, 3 x 12pd artillery and 3 x 3pd artillery and a dozen dragoons. From this point forward, I would be concentrating on adding Prussian cavalry or commencing the Austrian army. 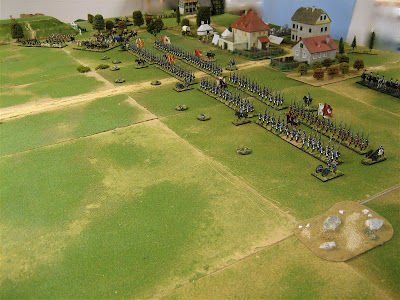 June 2010
We opened up the month with a Sudan game at Chez Protz and my beloved Seaforth Highlanders were virtually wiped out in the battle. Those darn Fuzzies were upon me before I had time to whittle them down with firepower. It rather reminded me of the Zulu horn attack. Despite the disgrace, it was a fun game, even for me. There is something about 19th Century Colonial games that does not allow one to take it too seriously. Lots of "chin chin, better luck next time old bean" banter was going about during the course of the game. :) 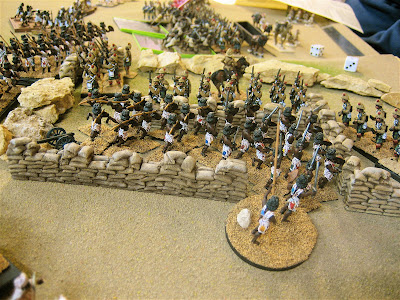 It was a bad day for the Seaforth Highlanders...

The Black Hussars graduated from the painting table, all 30 figures, as did a battalion of Croats (Ottokaner Liccaner regiment). Wow, those Croats were fun to paint with all of the different animation in their poses. 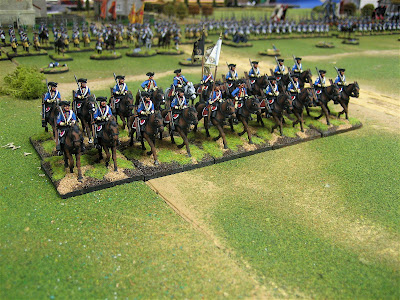 The first 20 figures of the Bayreuth Dragoon Regiment 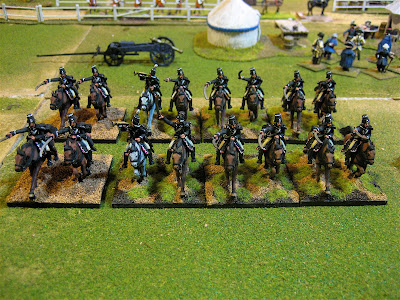 Well, that takes us through the first half of 2010. The major accomplishments were building up my Prussian army, playing in six games, and finally getting the basement flood situation fixed. Come back tomorrow for part II of Fritz's 2010 Year In Review, covering July through December.