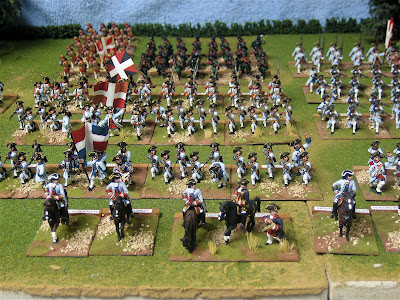 Let us continue with the review of the second half of 2010. I like to read comments from the viewers, so please feel free to click the word "comment" and then post a message or ask a question. I will answer your questions within the comments section.
July 2010
Not much to report on the gaming or painting front during July, as I was beginning the grand clear out of wargame armies and terrain. Packing old friends and sending them on to new inhabers took up most of my hobby related time during this period. One pleasant surprise was rediscovering my RSM French army, a part of which is pictured above. I just did an inventory of my SYW French army and it has 15 btns of 24 figures = 360 figures, 8 artillery pieces and crew(4 per gun) and 11 cavalry regiments of 12 figures = 132 horse and finally 8 command stands. Now this is a superbly painted army, by Dennis Smail of Lexington, and it is not an army that I want to part with, but if someone is crazy enough to wave a lot of cash in front of my nose and offer to buy the whole army lock/stock/barrel, I would have to reconsider. I will not consider any offers to break the army into pieces. So there you have it. 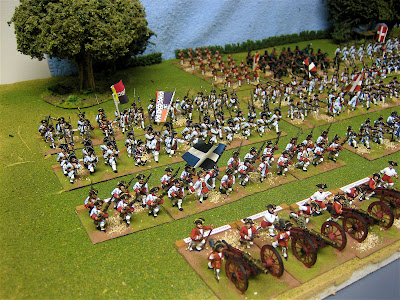 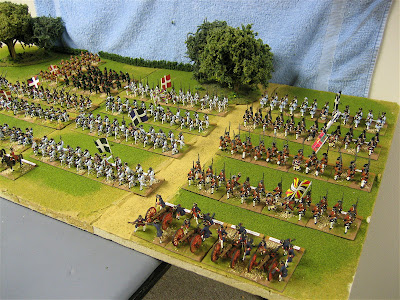 August 2010
I did not do any gaming in August as my daughter had leg surgery at the beginning of the month and I had to help her convalece at home. Most of my RSM Austrians and Bavarians found new homes, so I had a lot of figure packing to do.

On the painting docket, I finally found the time to paint that wonderful Prussian field forge that I purchased from Berliner Zinfiguren a couple of years ago and added some supply wagons and limbers to my Prussian battery. 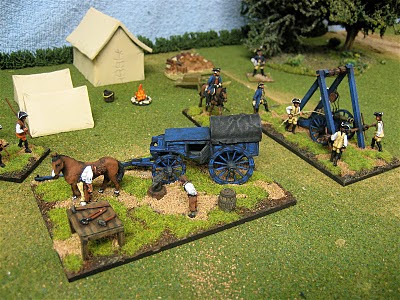 Field forge from BZ, blacksmith and assistant from Hovels, tents from Miniature Building Authority. The artillery "gyn" or hoist was scratch built by der Alte Fritz. Artillery helpers are from the Minden pioneer set of figures.

September 2010
I finally got to play in a wargame, as our group traveled to DeKalb to visit Randy's house and play in his North Africa, circa late 19th-early 20th century wargame scenario. It was sort of based on The Wind & The Lion film. 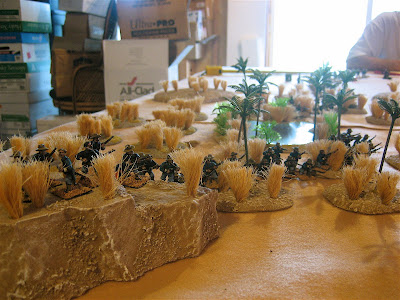 My Redoubt US Marines prepare to "Speak Softly and Carry A Big Stick" somewhere in North Africa. 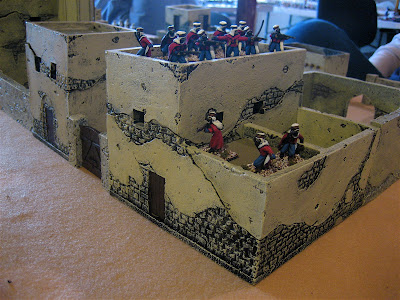 October 2010
We fought the Battle of Korbach (July 1760?) at the end of the month, so this provided me with a little incentiver to first paint some more British cavalry, which our group is sorely lacking. So I added a squadron of Life Guards using some superb Stadden figures and H1 horses, as squadron of Suren British Horse (1st Horse Regiment) and a squadron of RSM British dragoon guards. It wasn't enough as the French continued their mastery over the redcoats in our series of BAR games. I don't believe that the British have ever won a battle. This is partially explained by the fact that we have refought Fontenoy several times and failed to reverse history. Nevertheless, my beloved redcoats will need some reinforcements in the future in order to improve their competitiveness. 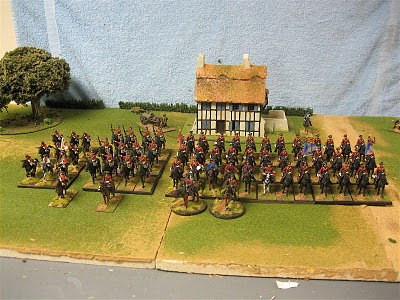 My entire British cavalry contingent (5 squadrons of 12 figures = 60 figures), or enough to equal two French regiments (36 figures each) or one regiment of the French Carabiniers (60+ figures).

November 2010
Our group did not do any war gaming this month as the Korbach game was held on the last weekend of October and Thanksgiving holiday taking out a couple of good weekends, with everyone having family commitments, etc. So I took advantage of the extra hobby time to start work on the Austrian equivalent of the Prussian battery for my Minden project. 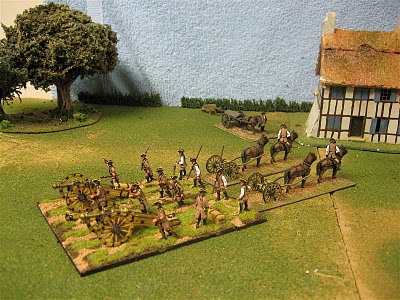 The first two sections of an eventual 4-section Austrian artillery battery that will have two 6pdrs and two 12pdrs. Guns are from Berliner Zinfiguren, crew are from Minden, and the limber teams in this picture are from RSM.

At some point during the year, I had also painted two battalions of the Kollowrat Austrian regiment, so now I was clearly in the build up phase for the Austrian army. My goal was to field two armies of Minden figures in time for the SYW Association Convention in March 2011, but now it looks like I might be running out of time unless I devote all of my spare time to painting my own figures. With a few commissions still left on the books, that might be hard to do and thus push the unveiling of the Minden game into 2012.
December 2010
We played two smaller games this month. The first was our annual Light Infantry game held at Chez Frey in Dekalb, and the second was the end of the year winter raid on the Austrian field bakery at Schloss Fritz, just after Christmas. 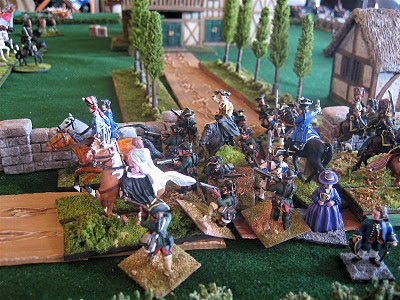 The capture of Lady Catherine by the Hesse Seewald Jagers in our annual light infantry game. We came THIS CLOSE to capturing that little scamp, Lady Diana Pettygree, who applied the business end of her riding crop to the faces of some jagers, who tried to grab at her reins. The rest of the little band of traitors managed to escape. But not Catherine, Mu ha ha ha ha!!!!!!!!!!!!!!!!
I just realized that I have never posted pictures of the first game on this blog, and I will remedy that later this week. Needless to say, the minions of Lady de Winter had the little traitor, Lady Pettygree, literally in their grasp, but she managed to escape along with most of her retinue. Alas, pour Lady Catherine did not escape. The jagers turned her over to the tender mercies of Lady de Winter. What will happen to poor Catherine? Stay tuned in 2011 as more of the story behind the mysterious Black Coach is unveiled, at last.