Raid on the Field Bakery 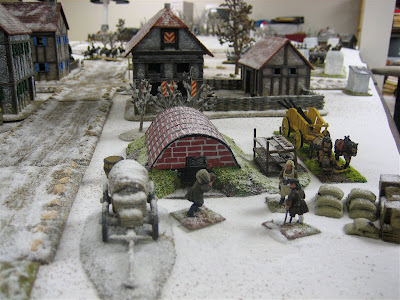 Austrian field bakery and bakery wagon (yellow) constructed by Ed Phillips. Town and roads were made by Herb Gundt. Front Rank civilians work at the bakery.


Yesterday we set up my Winter terrain in my basement and staged a scenario involving a Prussian raid on an Austrian field bakery, somewhere in Silesia, possibly at the village of Born, which lies in front of the Austrian battle line at Leuthen. We had gotten about twelve inches of snow over the Christmas weekend so it seemed like an appropriate thing to set up a winter game. Bill Protz, Randy Frye and Keith Leidy joined me in this little skirmish game.

I wanted to do a BAR rules game in a skirmish or small action with just a few troops. The actual table was 6ft by 17ft, so hopefully this would give us plenty of room for maneuvering troops. The opposing forces are shown below:

Town Garrison Command (center and right flank)
2 btns of Austrian musketeers
1 coy of light piquets
1 Austrian battery ( 2 x 6pdrs and 1 x 12 pdr and 16 crew)
1 sqd of horse grenadiers serving as an escort for the garrison commander
5 sqds of Saxon dragoons (arriving on turn 3 or 4 , depending on a die roll) 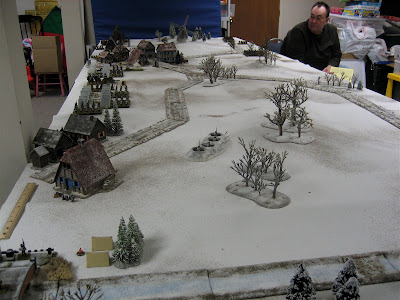 Here is an overview of the table, showing the Austrian right flank in the foreground, the village of Borne in the center background, and the Austrian left flank near the windmill hill.

The Prussian players were given a handful of yellow cards and instructed to write the name of each unit under their command on a card. They were given several spare cards to be used as "dummy cards" with no unit on it to provide some disinformation or fog of war for the Austrians. The Prussians began the game by setting their cards on the table in lieu of their actual figures. The Austrian players could only guess as to what units might be listed on the cards. So they had no idea of the forces that were descending upon the town of Born.

The Prussians were given two free moves to start the game so that they could maneuver and sneak up on the town's garrison. On Turn 3, the Austrian players had a 50% chance of activating their units with a D6 die roll (odd number - they don't activate; even number - they do activate). In the event that a Prussian unit moved within 16" of an Austrian unit, then the Austrian unit could automatically activate. 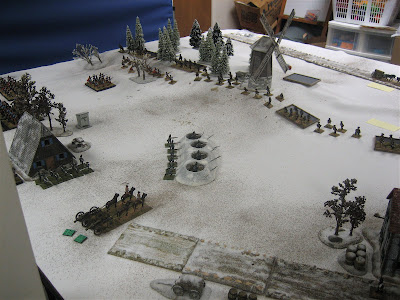 Prussian jager surge over the hill and begin to engage the Croats and Austrian jagers that were guarding the left flank of the table. You can see that some of the Austrians are dug into wolf pits for added protection. 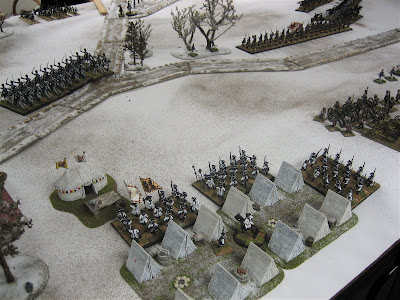 Prussian Zieten Hussars attack part of the Austrian camp and zero in on the Austrian artillery battery, hoping to take it out before it can fire and do any damage to the attackers. 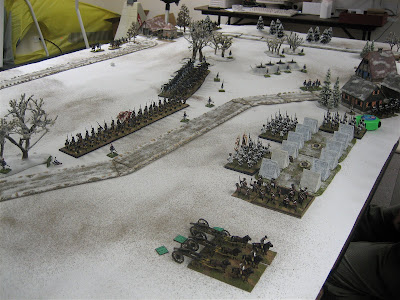 Prussian musketeers (IR19 Margraf Karl) attack the other portion of the Austrian camp. The Austrian infantry have just been activated and are considered disordered until they have time to form up. 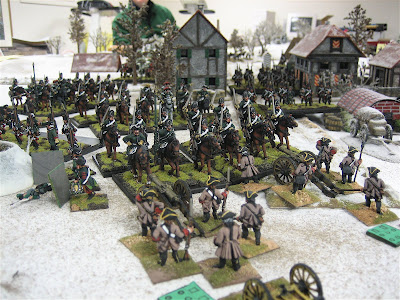 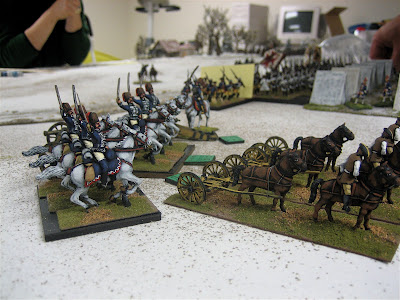 It was a bad day for the Austrian artillery as the Zieten Hussars (Stadden figures) cut down the Austrian crew manning the guns in front of the tent encampment in the center of the table. 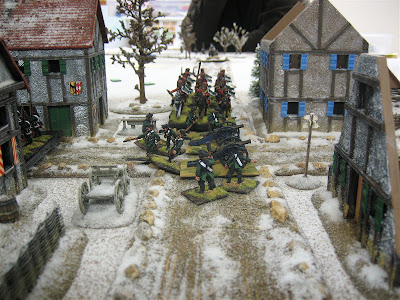 Von Kleist captures the town of Borne and sets up a battery of 6pdrs to control the approaches to the town, in case the Austrians counter-attack. They did not. 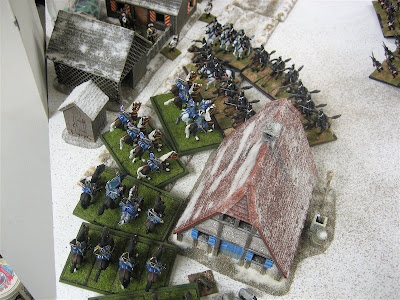 Saxon von Bruhl cavalry arrive on the Austrian right flank and attempt to push back the von Ruesch or Black Hussars.

I think that we played about seven or eight turns, including the first two turns where only the Prussians were allowed to move. At the end of Turn 8, the von Kleist Kroats had captured the village and were preparing to blow up the field bakery. The two tent camps had been over run by Prussian infantry and the tents were set on fire. Clearly, the Prussians had achieved all of their objectives and were declared the winners.

This scenario shows that Batailles de l'Ancien Regime (or "BAR" for short) work well for smaller scale raids and skirmish level games. The scenario would probably have worked well had I deducted one more battalion of infantry from each side's forces. Each player could be assigned a command of one battalion of infantry, 2-3 squadrons of light cavalry, and a battery of light artillery if you wish to reduce the roster of troops even more.

I might want to tinker with the rules for activating the Austrian infantry forces. They nearly waited too long to activate, as the Prussian infantry was nearly in their camp before they could get started. That is sort of the effect that I wanted to achieve. The Austrians did benefit from a nice run of cards that gave them the initiative on most of the turns after Turn 3.