Some Progress Is Made 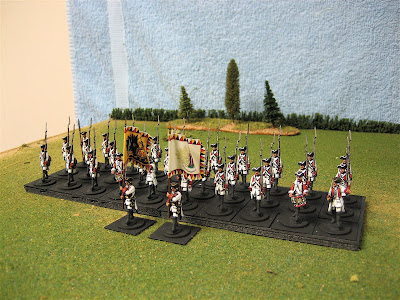 Minden Austrians painted in 2009. Not the grenadiers, but close enough.

What does one do on a cold dreary winter day when the weather outside is frightful, and one's football team is decidedly not delightful? Why you retreat to the painting table in the basement, put a Mozart CD on the player, and break out some Minden SYW figures to paint.

I had hoped to settle in on my cosy sofa, next to the warm fire in the fireplace, and watch the Chicago Bears play the evil New England Patriots. Alas, it was not to be as the score was 33-0 in favor of the Bad Guys at halftime. Now Der Alte Fritz didn't get to be Alte without learning a thing or two, so he gave up on the football game and pitched into 12 Austrian grenadiers that he needed to complete a 24-figure battalion of converged grenadiers. I think that I might also prime another 6 or 12 grenadiers this evening so that I can increase the grenadier battalion to at least 30 figures, which would be on par with the size of my other battalions.

It occurred to me that I am running out of time if I wish to have my Minden Project Austrian and Prussian armies ready for their debut at this coming year's Seven Years War Association convention, circa March 28-30, 2011 in South Bend, Indiana. The Prussians are ready for battle with 9 battalions of infantry, four spendid Berlin Zinnfiguren 12-pounders and crew, and a regiment of dragoons and hussars.

The Austrians, so far, only have 3 battalions of Mindens (but I have 2 of my old RSM battalions available if I rebase them) and 4 BZ artillery pieces and crew. I will have to use my old RSM Austrian cavalry as stand ins until I can get some Minden Austrian cavalry painted, later in 2011. Assuming that I can paint 60 infantry figures per month, that would two battalions of 30 (or one regiment) that I have to finish in January and another two battalions to complete in February. YIKES! That is cutting the time line a little too close for comfort.

Hmm, I can see that there is still much work to be done and no doubt I will be distracted and diverted from the SYW project once the Fife & Drum AWI figures start coming out of the production moulds in January.
Posted by Der Alte Fritz at 7:03 PM