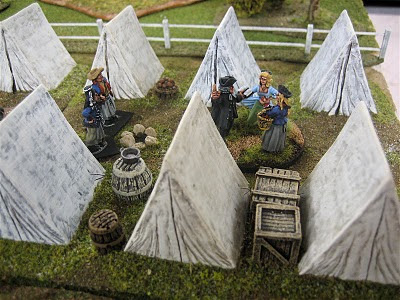 Foundry vignette of SYW camp followers, amidst some terrain provided by Herb Gundt of H.G. Walls. Click on the pictures to enlarge the view.

Lately, I've been adding a few more vignettes to sort of "spice up" my Prussian encampment in Silesia. The picture above shows some of the Foundry camp followers on the receiving end of a lecture from the regimental chaplain, also a Foundry figure. Gertrude and Brunhilde, both wearing borrowed Prussian coats, are obviously wives of some old feldwebels and are looking on with a disapproving eye. 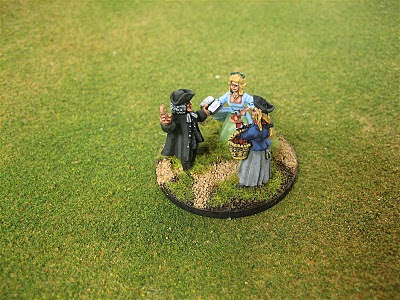 A close-up view of the Chaplain fighting off Temptation. Note the woman in the foreground is offering him a bite of the apple. How appropriate! 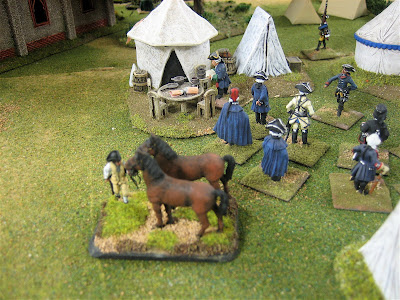 Horse holder from Minden Miniatures, RSM horses, and an assortment of officer figures from Stadden, Suren, Foundry and Front Rank.

The horse holder picture is a little fuzzy in the foreground (the horses are a little blurry, to be precise), but I wanted to post the picture anyway as it shows what you can do with a few simple steps. I used the RSM standing horses and simply cut away the reins and filed off the rest of the harnesses. Then I drilled a hole through the horses' muzzles and inserted some florists' wire to depict the new reins, which are now being held by the horseholder.

Tomorrow, I will post some pictures of the dragoon and jager mounted officers that Ioannis painted for me, and they look very nice indeed. But for now, here is sneak preview: 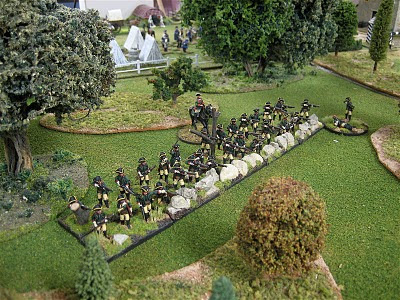 Minden jager battalion painted by Der Alte Fritz. Minden mounted dragoon officer painted as a mounted jager officer by Ioannis. You can also see a new jager vignette on the round base to the right of the battalion, showing a wounded jager being guarded by a Minden Prussian jager.