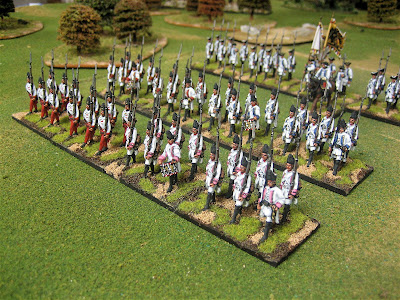 Minden Austrian grenadiers, converged into two battalions of 24 figures. Since this picture was taken a couple of weeks ago, I managed to increase each grenadier battalion to 30 figures. Click/double-click to enlarge the view please.


This evening I finished off a squadron of RSM Austrian dragoons for a painting commission that I was working on (I will post some pictures tomorrow) and I will get them dull coated tomorrow after the spackle compound on the bases dries overnight. With 48 dragoons behind me, I can revert to painting some needed things for my convention game at this year's SYW Association Convention on March 25 and 26 at South Bend, Indiana.

I have about five or six weeks to sprint to the finish line and complete the Austrian infantry and artillery, plus augment my Minden Prussian dragoons by another dozen figures. I also have to paint one 30-figure Jacobite battalion using Front Rank figures as I plan to run a Jacobite game on Friday and then a Minden Austrian-Prussian game as my showcase event on Saturday afternoon.


If I'm really cranking out the production, I might even paint a regiment of the dismounted Prussian hussars that I have on order from Minden, so as to have a second quasi-light infantry unit to use in my convention game. Or not...

Let's see, what else is on my list? I will have to find the time to make some hill and ridge modules from pink insulation foam so that I can break up the flat, parade ground appearance of my battlefield for the tabletop game. I will be using terrain boards that I made from 2-foot square ceiling tiles a couple of years ago. The hill and ridge modules are then placed on top of the boards. If you look through some of the recent pictures on this blog, you can see the terrain boards, etc. It all seems to be coming together quite nicely, but will I have enough time?


Fife & Drum Update
A quick note on the Fife & Drum AWI figures: the caster is working on the production molds and indicates that we ought to start spinning lead by the end of this month, if all goes well and we don't get any more blizzards. I will running a dealer booth at the SYWA convention and have the figures for sale there. We will also have a booth at the Little Wars convention in April.
Posted by Der Alte Fritz at 1:01 AM