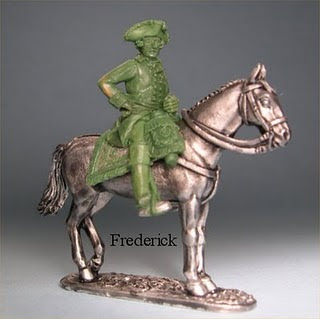 Frederick the Great, as sculpted by Richard Ansell, for Minden Miniatures.


Well, look at Him. There He is - der Middle Aged Fritz Himself in all of his Minden glory. Today, Frank Hammond posted pictures on his blog showing the latest greens made by the very talented Richard Ansell. Please click on the link below, which will magically take you to the Minden web site where you can see Frederick, von Zeiten, von Seydlitz, Prinz Ferdinand of Brunswick, and a wonderful vignette depicting two officers and an aide pouring over a map.


As explained on Frank's blog, Richard did not want to depict the old "der Alter Fritz" of legend and lore, for this was the persona of the King in the post war years after 1763. Frederick was still in his forties during the Seven Years War, and thus it is correct that he appear more youthful. I really like this sculpt and its depiction of Frederick. Needless to say, I will have one in command of my growing collection of Minden Prussians. I might even revive an idea from a few years ago and bring back the "Fritzy Awards" which I would hand out each year to those wargamers who have done something exceptional and out of the ordinary for the hobby. The winners would get a painted copy of this figure, attached to a pedestal or plinth.

I have lots of other ideas percolating in my mind so that I can put all the rest of the Prussian generals to good use. I look forward to the eventual release of these fine figures in the future.