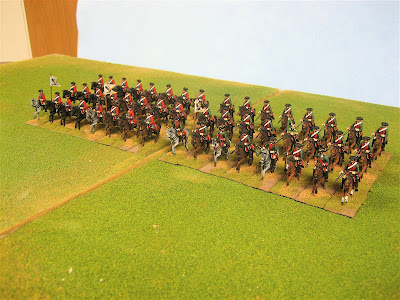 I recently completed a commission to paint some RSM Austrian Dragoons for the Seven Years War and you can see the finished results in the pictures that I have posted today. The client asked me to paint two squadrons of the red-coated Sachsen Gotha Dragoons and two squadrons of the green-coated De Ligne Dragoons. The figures are individually based on a 1" by 2" metal base (coated with primer to prevent rust) and divided into squadrons of 12 figures for the Batailles de l'Ancien Regime ("BAR") rules developed by Bill Protz.

I am particularly fond of the green coated De Ligne Dragoons, who are notable for their performance at the battle of Kolin in 1757. The Prussian van guard attack was breaking through Krechor village and threatening to envelope the Austrian right flank. Marshall Leopold Daun looked for some reserve to help stem the tide and the only available troops were the De Ligne Dragoons.

"Why those lads have no moustaches" exclaimed Daun, "can they fight?" (indicating their relative youth and inexperience in warfare)

"They may not have moustaches", replied their inhaber, "but they will certainly take a bite out of the Prussians."

Daun concurred that they must attack, and the De Ligne Dragoons launched a furious attack the broke the Prussian advance and helped win the battle for the Austrians. 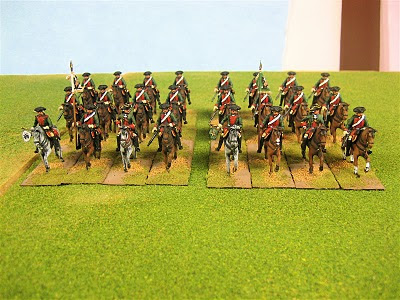 A closer view of the De Ligne Dragoons. 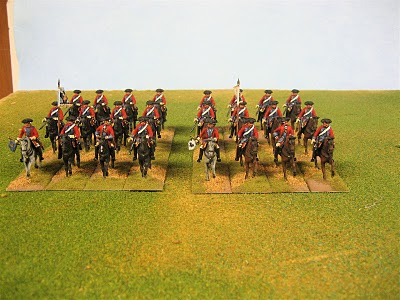 I will have some openings in my painting schedule for new commissions after the SYWA Convention on March 25 and 26. If you are interested in SYW era figures like these, the price for commissioned painting is $10.00 per mounted figure and $6.00 per foot or cannon. Prices do not include the cost of the metal figures or postage and insurance.

If you have any inquiries, then drop me an e-mail at: altefritz1740@yahoo.com and I will get in touch with you shortly.

Tomorrow I will post pictures of my complete Minden Austrian Grenadier battalions (30 figures each).
Posted by Der Alte Fritz at 4:12 PM