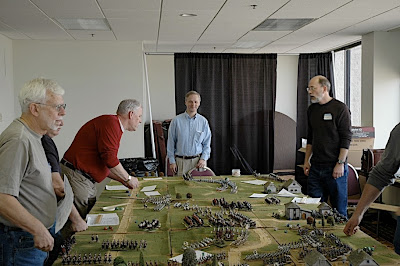 The Battle of Kolin 1757 - Der Alte Fritz is in the center (blue shirt) presiding over his participation game. Fellow BAR Group wargamer, Earl Kyle, is the distinguished looking gentleman on the right (my left) in the dark long-sleeved shirt. I can't identify the other players.

This morning I was surfing the Internet and happened to find the web site for this year's Seven Years War Association Convention, on March 26 to 27, 2010 in South Bend, Indiana. The site also has a picture gallery of past convention games. I was rather surprised to see many pictures of the Kolin game that I hosted that year. 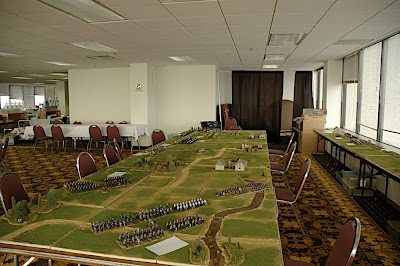 Here is a view of the game tables as set up to start the game, before the action commenced.


I made my own terrain boards using 2 foot square ceiling tiles as the basic board, since I knew that they would be perfectly square. I used the game maps from the Clash of Arms "Kolin" board game as my template, converting each hex to the ground scale that I would use in my game. In this manner, I was able to create a fairly accurate portrayal of the Kolin battlefield. I had also visited the site during the 1994 Christopher Duffy Tour, so I also had a lot of photographs to draw on for inspiration.

I added offcuts of insulation foam for the hills, including about three or four "wedding cake style" layers for the larger hills. Then I slathered everything with spackel compound, mixed with brown paint. The final step was to apply the flock with scenic cement from Woodlands Scenics. The villages were all made by Herb Gundt of H.G. Walls and the trees were K&M trees that Tony Adams mounted on MDF wood bases, which he also painted and flocked to a high standard.

This was probably one of the best looking terrain layouts that anyone ever brought to the SYWA convention, but "Best in Show" went to ... Bill Protz and his spectacular French & Indian War game with big battalions of 50 to 60 figures. Bill's game was set up next to mine, and I have to admit that I kept peeking over at his table to look at his appealing forces and table scenics, so his was an award that was well deserved.

After the games, Bill and I sat down together and talked about how we might use his rules system for fighting European theatre battles in the SYW. I was truly enamored with the idea of fighting the SYW with big battalions. And that is how the Batailles de l'Ancien Regime (or BAR) rules were born. Over the course of the rest of 2005, spring through fall, we built up our forces and play tested the concepts until we had a workable set of rules for the SYW. Then, a number of us in the gaming group encouraged Bill to publish the rules and the rest, as they say, is history. 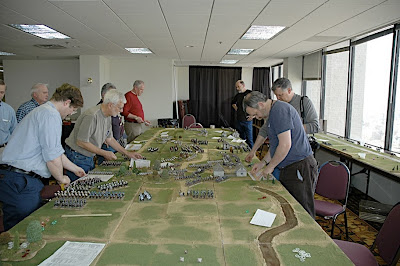 Here is a picture of the game in progress. The Prussian advance guard attack on their left is shown at the bottom of this picture. In the immediate center is the Oak Wood and Krechor village (next to the gentleman in the dark shirt). The Kaiserstrasse can be seen on the separate back table.

The main game table was six feet wide by 24 feet long. I also had a back table that was 2 feet wide and 24 feet long. The back table held the Kaiserstrasse, the paved road that Frederick's Prussians used to march around the Austrian right flank at Krechor village. 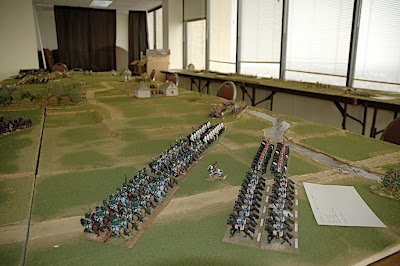 Here is Zieten's advance guard cavalry brigade with three regiments (20 figures each) in the front line and one dragoon and one hussar regiment in the second line. To their right, just at the table edge, are the grenadier battalions of the advance guard as they move towards the Oak Wood.


The wargame units in this game were using a 1:30 ratio with 28mm figures, largely RSM figures, but also a smattering of Foundry, Dixon and Old Glory figures. The infantry and cavalry regiments were largely 20 figure units, or about 600 men at the 1:30 scale. I used my own "Der Alte Fritz" rules, which are excrutiatingly easy to play. In fact, the rules fit on one side of one standard 8.5" by 11" sheet of paper. They are excellent rules for convention games, because they are fast paced and the players have all of the mechanics figured out by the second turn. So they can usually run their own forces and I only have to sit around and offer interpretations of the rules or provide suggestions as to what works and what does not work within the rules.


This year's SYWA Convention has its own dedicated web site, which you can access at the following link: