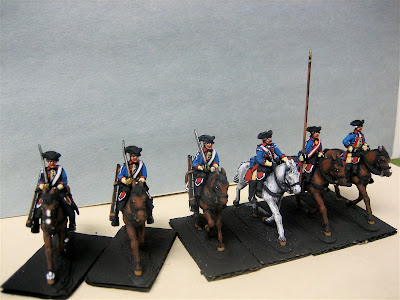 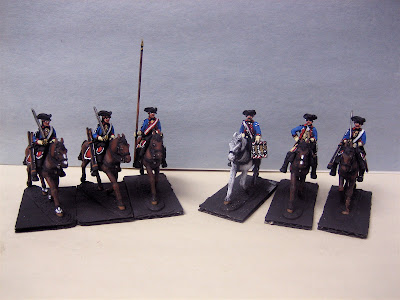 Please click on the pictures to enlarge the view. Minden Prussian dragoons. Keep in mind that when you enlarge the view, the figures are about 2 to 3 times their actual size, so this distorts the details and features, particularly the eyes, which in actual size, are meer pin pricks of white and black paint.


The first of the Bayreuth Dragoons
Here are a couple of pictures of the first six Minden Prussian dragoons that I painted yesterday and this morning. They are DR5 Bayreuth Dragoons. This will eventually be a 30 figure unit in "Phase I" of their assembly. In my 1:20 organization, five squadrons would be equal to about 30 figures. However, the Bayreuth Dragoons were a ten squadron regiment, so somewhere down the road, I might have to paint all ten squadrons, for a total of sixty figures. I have decided to mount the riders two per stand (2 inches square) rather than three per stand.

Olympic Hockey Gold Medal Game
More later-- must watch the US vs Canada hockey game right now. Even Mrs. Fritz is watching the game, so you know that it must be The Event of the Year.

Oh my goodness, the USA hockey team tied the game at 2-2 with 0:24 seconds left in the game. We are going to sudden death overtime. Regardless of who wins the match, this is an exciting Olympic hockey game.

Congratulations to Canada for a fine win in overtime. It was an exciting and very memorable game. Well played! I was rooting for Team America, obviously, but in a way, I sort of wanted Canada to win since hockey is their sport and a near religious experience for Canadians. I think that a loss would have really depressed the whole country. Not so in the US. Our team played well and did their best and we are proud of them. I am sad to see the Winter Olympics come to an end. Mrs. Fritz, Lady Emma and I enjoyed our evenings watching the games.

I guess that I now have more time for painting Minden Miniatures in the evenings.
Posted by Der Alte Fritz at 2:25 PM