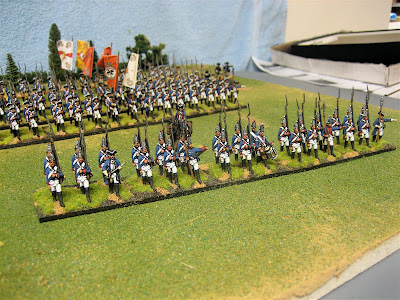 I completed the basing of the Wedell Grenadier Battalion (1/23) this evening and thought that I would post a couple of quick pictures for Show & Tell before going to bed for the evening. You can see the rest of the brigade, so far, in the background.


I have a battalion of 24 to 30 Prussian jagers that are primed and ready to paint next. I might just paint a few of them and then switch over to the first of the Minden Prussian dragoons that I just received the other day. They are real beauties, as you can see in the picture below. I plan to prime a few of them tomorrow evening and then paint one each of the officer, drummer, ensign and trooper so that everyone can see how they look after they are painted. 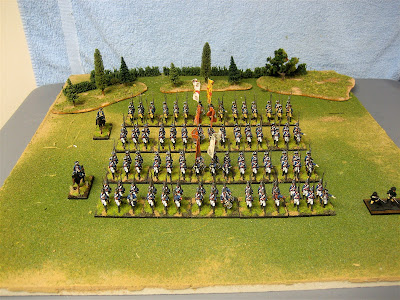 Overhead view of my Minden Prussian brigade so far.


So far, I have one battalion of IR5, two battalions of IR1 and one grenadier battalion. Also completed, but not shown, are a dozen Prussian artillery crew and some Berlin Zinnfiguren 12 pound cannon. 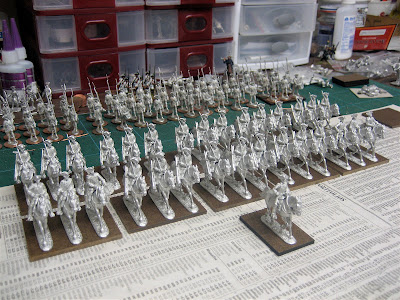 
And above, here is a Full Stokes Shot of the Bayreuth Dragoons (DR5) after they have been cleaned up (filing the bottom of the horse base and taking a swipe of a rat tail file underneath the rider so that I have a cleaner "metal on metal" bond when I apply the super glue to the castings. Minden Miniatures castings don't need much in the way of pre-primer preparation, as the castings are so incredibly clean. Mostly, I swipe the base of the horse with a file so that some bare metal is exposed so that the glue will make a better bond when I eventually glue it to the base. Rarely, if ever, do I find any flash on Minden figures. That's nice.

By the way, a Full Stokes Shot is a picture of all of your miniatures lined up in their unpainted state getting ready for the priming booth and eventual painting. Stokes Schwartz made such pictures famous on his Grand Duchy of Stollen blog. I don't usually post unpainted pictures on my blog, but I thought that they would convey how good they look. I can't wait to actually paint them.

You can also see 60 Minden Austrian infantry in the background of the last picture, above. I was going to use these in my BAR Austrian army, but that's the equivalent of two Austrian battalions in the 1:20 Minden Project that I could use, if only I can pry the figures off of the pennies. I may try freezing the figures in the freezer for a couple of hours and see if that loosens the bond. It's worked before, so I will give it a try again.