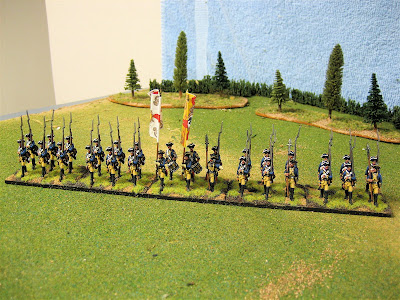 
I completed the first of two battalions for IR5 Alt Braunschweig yesterday and you can take a closer look at the results by clicking on the pictures. The flags are from GMB Designs, and because this battalion has both the liebfahnen (white) and the regimentfahnen (colored), that indicates that this is the first battalion of the regiment in my growing Minden army. The second battalion will have two of the colored (yellow with red flames) regimentfahnen. 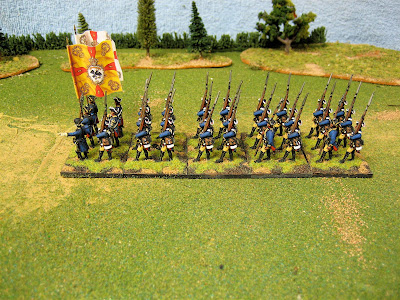 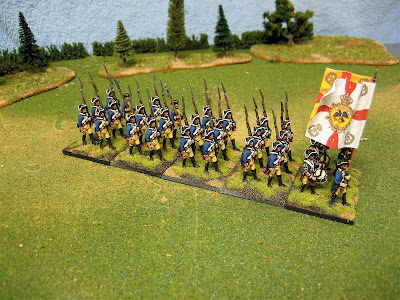 The inhaber of the regiment was Prince Ferdinand of Brunswick, although the regiment was actually under the command of Colonel Johan Christoph von Prignitz, who perished at the battle of Rossbach in 1757. I have not been able to find any information regarding the identity of the colonel who would have replaced von Prignitz after Rossbach. A major von Lestwitz is mentioned at the battle of Torgau in 1760.

The regiment was garrisoned at Magdeburg during peace time and it recruited from the cities and towns of Magdeburg, Calbe, Stassfurt, Aken, Egeln, Gortzke and Loburg, among others. Frederick held the regiment in high regard, noting that it was one of his "good" regiments, and as such, IR5 usually accompanied the King as part of his royal army. The grenadier companies were combined with those from IR20 and were commanded by Major Christoph von Billerbeck ("Jung Billerbeck").

As part of the King's Army, the regiment fought in most of the major battles in the Seven Years War including Lobositz, Rossbach, Leuthen, Hochirch, Kunersdorf, Liegnitz and Torgau.

The regiment wears straw colored breeches, waistcoat and facings (lapels and cuffs), but retains the red coat lining, so that the turnbacks are red. I chose IR5 as the subject for my second Minden regiment because it has the straw small clothes, as opposed to the white small clothes in my IR1 regiment. Thus, I will be able to tell the two regiments apart from one another simply at a glance, based on the lapels, and also by the rather colorful flags that the regiment carries. 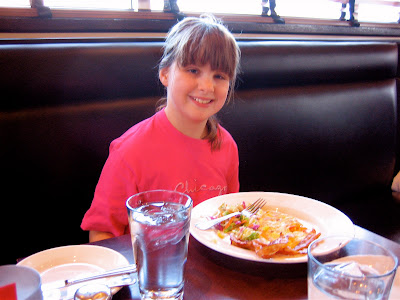 
Since today was Valentines Day, I took Mrs. Fritz and Lady Emma Cuddleston-Smythe out to brunch. You can see from the above picture that Lady Emma was enjoying the day. Mrs. Fritz declined to allow the royal photographer to take her picture. Who am I to argue. Tomorrow, it is Presidents' Day in the US, which means another day off for me. We plan to go see the movie Avatar and I am rather looking forward to it, what with all of the buzz about the special effects.

Next Saturday, I will journey up north to Brown Deer, Wisconsin at Chez Chevert, where we will refight the Battle of Mollwitz. I am looking forward to seeing how that battle turns out for Frederick and his Prussians. Good infantry and very bad cavalry for the Prussians, and the reverse for the Austrians.
Posted by Der Alte Fritz at 11:24 PM