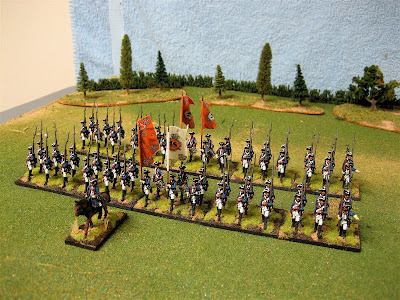 
Last evening I completed the basing and glued all of the flags for the first regiment of my new SYW Minden Miniatures Project. All of the infantry, cavalry and artillery units will be comprised solely of Minden Miniatures. There is a link to the company's web page on the left hand side of this page. ( I still need to touch up the edges of the orange flags with some orange paint, in order to hide the white paper that shows through along the edges).

My plan is to paint both battalions of each Prussian regiment (and each Austrian regiment) that I paint for this project. The regiments will also have a mounted colonel or inhaber. The first regiment in my army is, coincidentally, the first regiment in King Frederick II's Prussian army: IR1 von Winterfeldt. (the "IR" designation stands for "infantry regiment" and the number is the regimental number -- during the 18th century, the regiment was known by the name of the inhaber; they did not use regimental numbers until the early 19th century).

Given that Major General Hans von Winterfeldt was one of Frederick's senior officers, he would more likely be in charge of an independent command or a wing of the army comprising some dozen or more battalions of infantry. So he was unlikely to be in direct command of his own regiment. Christian Rogge was kind enough to research the name of the Lieutenant Colonel von Munchow, as the likely commander of the regiment during the battles and campaigns in which IR1 fought.

Here are a couple more pictures of the regiment: 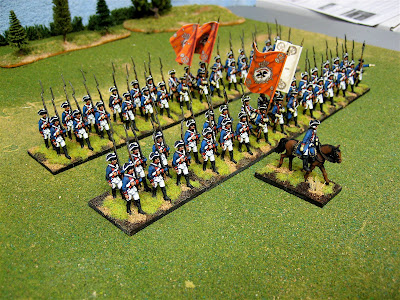 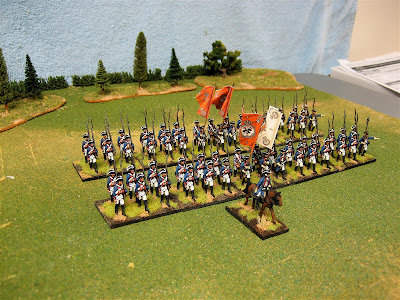 Each battalion has 30 figures based six per stand in two ranks. Thus at a 1:20 ratio, the battalion has 600 men. With this organization, I can use either my own "Der Alte Fritz" rules, or Rusty's Rules for Horse & Musket Warfare" or maybe I will even give the new "Black Powder" rules a tryout. The latter set of rules sounds like it might be a lot of fun. The bases measure 60mm wide by 40mm deep and are made from MDF board that I purchase pre-cut from an outfit called Georgo Bases.

I have also completed 12 artillerists and 3 Berlin Zinnfiguren 12 pounders, but I have not based them yet. I have decided to glue the crew figures to the base, but keep the gun models loose so that I can remove them and attach them to the limber teams. I will use the RSM limber teams for my gun sets.

Next on my list will be IR5 Jung Braunschweig, who had Prince Ferdinand of Brunswick as their inhaber. Obviously he was rather busy commanding the allied army in western Germany, so Ferdinand would not have been commanding the regiment in the field. If anyone can dig up the name of the Lt. Colonel of IR5, circa 1757, then please drop me a line or a comment in the comments section of this page.