Frederick's Birthday & the Battle of Winterfeldt 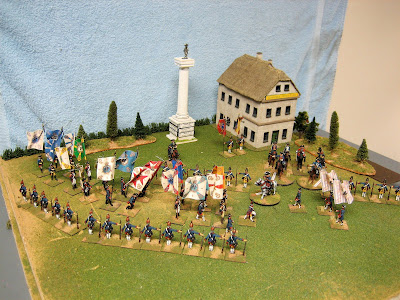 The parade of colours (GMB Designs) past the approving eye of Frederick the Great.


Today, January 24th, is the anniversary of Frederick the Great's birthday. I have posted a picture that I took last year showing the parade of the colours before the King on his birthday. The Potsdam Gardes (Suren figures) line the parade rout on each side as the regimental fahnenjunkers carry their regimental colours past Der Alte Fritz, under his approving eye, for review.

Behind the King, one can see the general staff assembled. The portly fellow just behind the King is the Duke of Bevern, who only yesterday, won a great victory over the Russian army in the Battle of Winterfeldt. So there is much cause for celebration: the King's birthday and a victory on the battlefield to start the new year.

The Duke of Bevern was commanding the secondary Prussian army assigned with the task of defending the eastern frontier of Silesia and Poland against a winter attack by the Russian army of Count Apraxin. The two armies engaged one another in the winter snows near the little Silesian town of Winterfeldt. Click on the pictures to enlarge the view of the action, below: 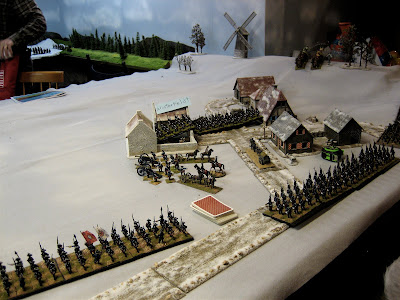 Prussian infantry sets up the defense of the village of Winterfeldt on the Prussian right flank. 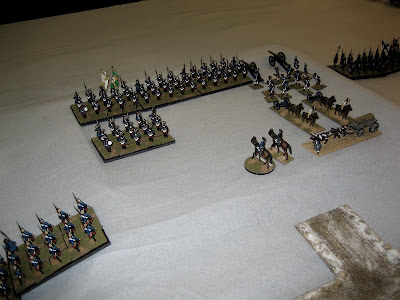 The Prussian redoubt in the center. 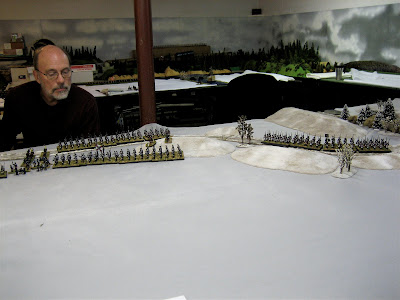 The Prussian left flank was protected by a series of low hills.


Bevern's battle plan was defend in the center, where he had constructed a great earthen redoubt and also to defend the right flank anchored on the village of Winterfeldt. He was hopeful that an opportunity might emerge to counterattack on his left, where he placed two strong regiments of cavalry: the DR2 Jung Krakow Dragoons and the CR2 Prinz von Preussen Cuirassiers. It appeared the Russian attack was concentrated on the redoubt and on the village of Winterfeldt. As a result, the Russian right flank was dangling in thin air, with no cavalry support. Bevern bided his time, drawing the Russian infantry into the center, before unleashing the cavalry and ordering his left wing commanded, to counter-attack with the infantry. 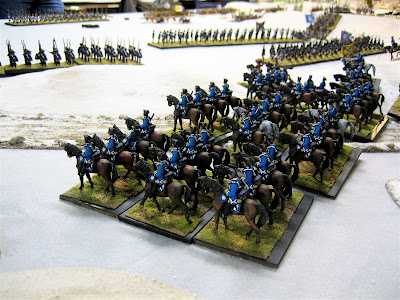 The Jung Krakow Dragoons (DR2) see that the Russian right flank is hanging out in the air and so they move forward to attack the Russian infantry. 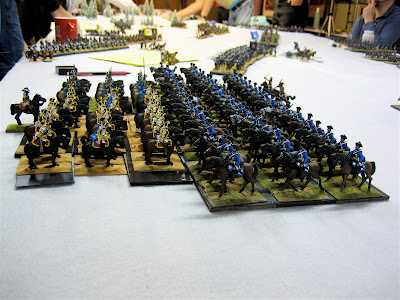 The Jung Krakow Dragoons (right) attack a mixed force of Russian cavalry including cuirassiers, horse grenadiers and dragoons. The first round of melee is a stand-off. 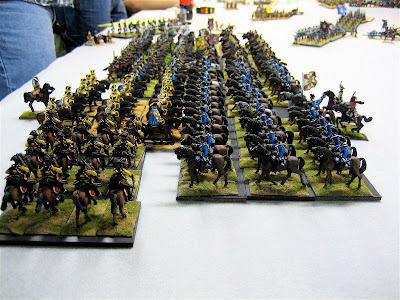 Both sides add reinforcements on the second round of melee, including the Prussian Yellow Cuirassiers, who strike the flank of the Russian cuirassiers and rout them off the field. Weight of numbers gave the Prussian horse a considerable advantage in this melee.


The Russian attack in the center was relentless and soon the Green and Red coated infantry were close to the redoubt. For a moment, it appeared that the Russians would be able to exploit a gap in the Prussian line, that appeared just to the right of the redbout. The sole Prussian infantry regiment of IR42 Markgraf Friedrich, was melting away. The only thing left to stop the Russian advance was a small regiment (3 sqds) of Black Hussars. Bevern quickly ordered the IR35 Prinz Heinrich fusiliers to double quick over to the right of the redoubt to plug up the gap. They arrived just in time, to the relief of the Black Hussars. 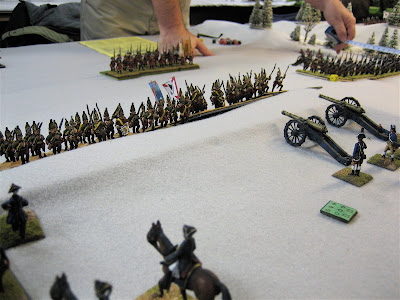 Meanwhile, in the center of the battlefield, the Russian grenadiers advance towards the Prussian redoubt and whittle down the numbers of the Prussian infantry who are providing support for the battery of Brummers. 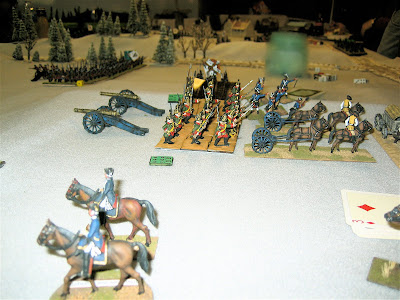 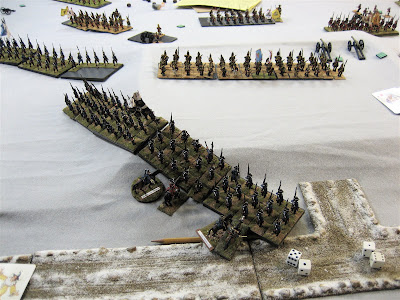 The Prussian army commander, the Duke of Bevern, personally leads IR8 von Amstel musketeers in a counter-attack against the Russians occupying the redoubt. In the background, you can just barely detect the shot up remnants of the supporting Russian battalions -- they will probably not be enough to hold the redoubt, for the Prussian left flank brigade and all of the Prussian cavalry are now descending on the Russian flank. 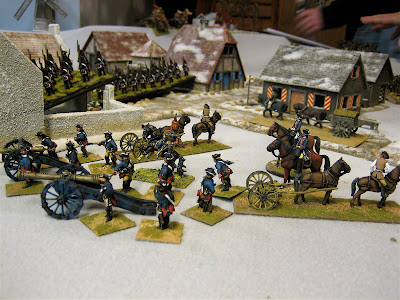 Prussian artillery site their cannon outside of Wintefeldt. The von Kliest Kroaten defend the town against the Russians. 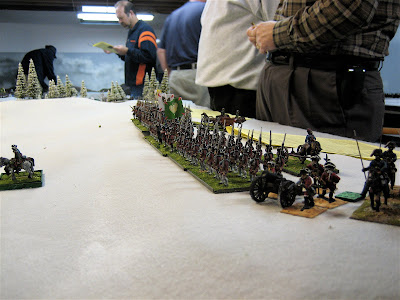 The first of four Russian battalions that attacked the town of Winterfeldt. 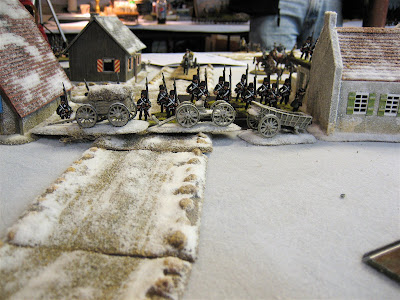 The von Kliest Kroaten defend the town, but they were eventually evicted by Russian grenadiers. The fighting surged back and forth as each side fed in reinforcements. 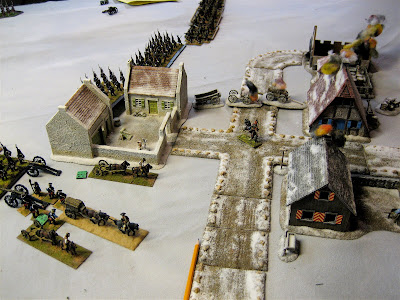 The town is in flame, courtesy of Russian howitzer fire. The counter-attack of the Prussian Heyden Grenadiers evicts the last of the Russian infantry from the town of Winterfeldt. It would be a Prussian victory.

The battle ended with both flanks of the Russian army on the verge of collapse, while a single battalion of Russian grenadiers grimly held onto their hard-won redoubt. It was kind of a strange battle, as Bevern was under the impression that he was outnumbered and was fairly set on playing a defensive battle, but once it was apparent that the Russian right flank was vulnerable, the Prussian counter-attack was swift, sure and severe. Over the the Winterfeldt side of the table, it was simply too difficult to attack an opponent defending a town unless the attacker's forces are overwhelming, when in fact they were not. So the end result was a sort of double envelopment of the Russian army. In retrospect, we should have cut back on the number of Prussian infantry battalions. They had 12 battalions to 11 btns of Russians, 3 battalions of Austrians, and one late arriving Russian battalion. The Russians really didn't stand much of a chance with such balanced armies, and they also suffered from a bad run of cards that often resulted in the Prussians getting the first fire. However, the Russian players gave it their best try and nearly succeeded in capturing both the redoubt and the town of Winterfledt.


It is always difficult to take good photographs against the white or grey winter table cloths. The game table looked much better than the pictures would otherwise suggest. I am planning on purchasing a winter terrain mat from The Terrain Guy who is located in Texas. Hopefully, the winter mats will have more contrast than what I can get using felt mottled with white and grey paint.

Another game note; we played the game using three different game zones, each having its own deck of cards for movement and firing initiative. This way, each section of the table could play at its own speed and not delay the game for faster groups. On average, we completed 7 or 8 game turns and in each section, we had a decisive result in about four hours of play time.
Posted by Der Alte Fritz at 3:38 PM