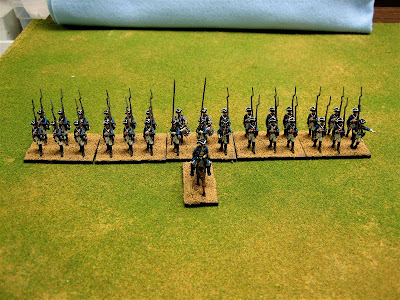 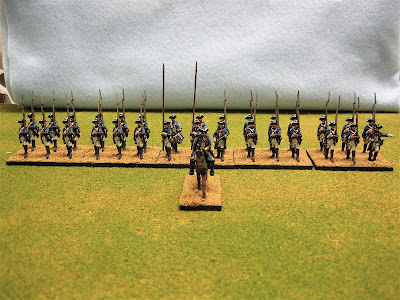 
I have spent the past week working on the first of many battalions that will comprise my SYW Minden Project and thought that I would post the first pictures today. As a rule, I don't like to show pictures of serried ranks of unpainted or partially painted figures. I generally only post the pictures after the unit is completed. However, I am breaking my own rule so that I can show you how nice these figures look and also to talk a little bit about my current thinking regarding this project.

As you can tell by the pictures, these are not going to be "big battalions"; well, maybe medium sized battalions as they will be 30 figures strong at a 1:20 figure to man ratio. The figures will be based on five stands measuring 60mm by 40mm and will be affixed to the base in two ranks. Originally I had planned on gluing down a strip of walnut or cherry to the back edge of the base and using that as a "name plate" with the unit's name printed out on my laser printer. While that might look ok with larger 28mm and 30mm figures, the name plate just didn't look right to me, so I left it off the base. How then, will I identify one regiment from another? After awhile they all begin to look the same. The answer lies in the thickness of the MDF wood base itself. It is thick enough whereby I can print the unit's name (e.g. "IR1 Winterfeld") in 6-point font and have plenty of space on the back side of the base to glue on the name tag. With the small font, the name plate is not obtrusive, yet it is large enough to read. Thus a player will know which unit this is on the wargame table.

You will note that I have not yet glued on the GMB Designs flage for the battalion. This is because I have found that a spitz of Dull Cote also fogs over the flags. So I will finish the bases tomorrow, splashing brown ink over the grit, then dry brushing a light coat of tan paint, and then finally applying the static grass. Once the grass dries, then I will Dull Cote the whole battalion before gluing on the flags.

I have another battalion of 30 musketeers primed and ready for painting. My plan is to paint both battalions of four regiments (8 btns in total) and then add two grenadier battalions, a jager battalion and finally for the twelveth battalion, either a Guard battalion or perhaps a lowly garrison or freikorps battalion. At least for now, the plan is to limit each Minden army (Austrians and Prussians) to 12 battalions and 4 cavalry regiments, or enough for a small participation game at a wargame convention.

For the jagers and the Austrian Croats, I will place 3 figures on each base with a total of 10 bases for a light infantry battalion. They will have the same 60mm frontage and I will either use the same 40mm depth as the regular infantry, or go with a 30mm deep base. The light troop bases will have the same frontage as a musketeer or grenadier unit, but only 3 figures on it instead of 6 figures.

Perhaps my readers can leave some comments with regards to basing the artillery. I know that I want to glue the artillery crewmen onto the base. The question is, do I want to also glue down the cannon, or should I leave the cannon free-standing, so that I can remove it from the base and attach it to the limber team? There are merits to either method, but I haven't decided yet. Since I can't set up a poll, leave a comment and let me know what you think.
Posted by Der Alte Fritz at 10:10 PM