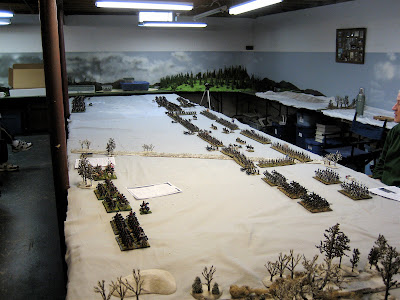 A pre-battle view showing the set up of the Prussian army (right) as it advances towards the Austrians in front of the village of Mollwitz. Note "army square" deployment with half battalions on each end, closing the rectangle.

It is 12:30 AM and I am getting ready to hit the hay and get some sleep before traveling north to Brown Deer, Wisconsin where we will play test a refight of the Battle of Mollwitz. We will use the Batailles de l'Ancien Regime rules, or "BAR" for short.

As you can see from the table above, the Austrian army is outnumbered with respect to infantry, which is generally of average to poor quality. Its Elite cavalry outnumbers the Prussian cavalry.

The Prussians have more infantry, all rated as Veterans, but their outmanned cavalry are all of lower quality.